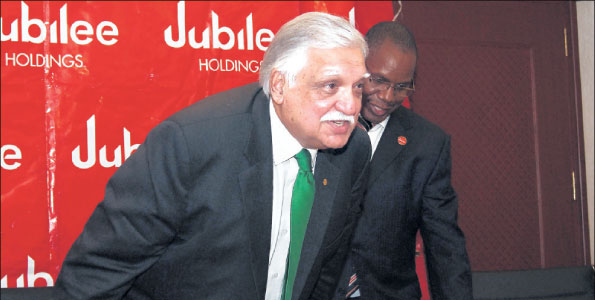 Financial services and insurance firm grew its net profit by 35.6 percent in the half year ended June 2014. This was driven mainly by higher premiums. Net profit stood at sh1 billion up from sh793.8 million. Gross premiums were up by 28.5 percent to stand at sh12.9 billion. Investment income increased by 12 percent to sh1.8 billion.

An interim dividend of sh1 per share was declared which is no change from the previous year.

Jubilee Holdings has insurance and investment subsidiaries in Kenya, Uganda, Tanzania, Burundi and Mauritius. It is ranked as the largest insurer in most of those markets. It controls premiums worth sh5.5 billion making it the largest insurance company in Kenya.

In terms of expansion plans Jubilee is planning to set up shop on West Africa. In its investment strategy it has invested in real estate through their associate PDM Holdings Ltd, infrastructure projects such as Seacom and Bujagali, a Ugandan based power company. It will spend sh1.8 billion in Uganda and sh1.5 billion in Tanzania in residential and commercial properties.