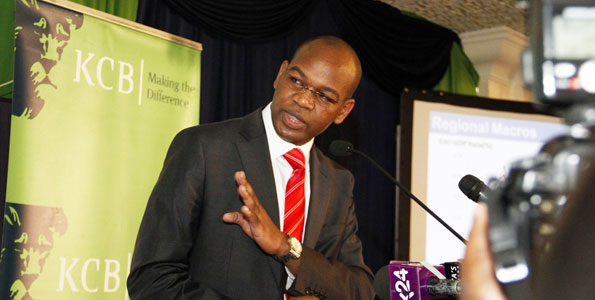 KCB has reported a 13.8 percent rise in net profit to sh8.2 billion, up from sh7.2 billion in 2013. Fees and commission income grew by 13 percent to sh5.67 billion while foreign exchange trading went up 25 percent to sh2.22 billion.

KCB South Sudan contributed 7.1 percent, sh831 million, to the group earnings. Two new branches will be opened in Juba. It has a market share of 50 percent due to its early entry into the oil rich nation. The bank’s regional subsidiaries contributed just 7.3 perfcent of pretax profit, these are units in South Sudan, Uganda, Tanzania, Rwanda and Burundi.

When it comes to expansion plans, KCB wants to set up a subsidiary in Somalia. It also plans to expand into Democratic Republic of Congo, Zambia and Mozambique. The CEO, Joshua Oigara, plans to have more than 5 million customers by the end of the year and a long term goal of being in more than 10 African countries.

After successful issuing its first sovereign bond worth $2 billion last month, KCB is targeting international debt market for its mortgage business. It is targeting 1 million new mortgages. The bank’s insurance business is growing at around 1000 percent on an annual basis and according to the CEO it may contribute to around 15 percent of the group’s revenue in future.