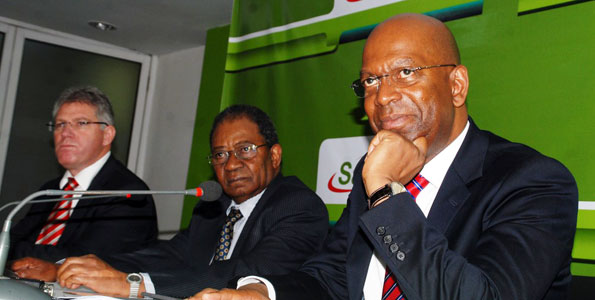 Leading telecommunication company Safaricom has once again produced massive results for the first 6 months of its 2013-2014 financial year. The company’s total revenue was up 15% to stand at Ksh79.3 billion. Net income stood at 31% growth to 14.7 billion. Customer numbers grew to 21..82 million. Voice revenue made over 50% of the revenues then Mpesa, data and SMS respectively.Non-voice revenue grew by30% to make up 35% of the revenue.

Voice registered 6.4% growth to stand at Ksh43.67 billion with 21.85 million active customers. 36.6% of airtime top-ups were directly through Mpesa and there was a 29.3% increase in emergency top ups.

This experienced 24.7% growth in revenue to stand at Ksh15.59 billion driven by increase in 30 day active customers. Ksh121 billion is sent averagely per month

ARPU in Mpesa stood at Ksh207 in a single month

SMS registered 12% growth in revenue to stand at Ksh7.17 billion. The number of 30 day active customers was 12.37. ARPU here was Ksh55 per month

Smartphone growth in the network stood at around 3.1 million. Increase in smartphone usage is around 104%. When a user migrates to a smartphone the ARPU goes up by an average of 182%.

Around Ksh12.37 billion will be invested in fibre optic and modernization of 2G and 3G sites. Already 1500km of fibre is laid and another 1650km is to be laid down. Safaricom also plans to launch 4G/LTE internet within the next month and expects it be in 15 major towns in the next 12 months. 184 LTE sites will be deployed in Nairobi and 50 in Mombasa.

Safaricom is focused on growing the youth market share. It acquires an average of 463,000 new subscribers from this segment every year.