Shopping is the only thing you can do in shopping centers? Such a thing of the past.
Malls have become huge entertainment zones, where families can do more apart from window shop. In fact, some malls around the planet look like amusement parks more than shopping spaces: roller coasters, indoor water parks and even bowling alleys.
Listed down are 10 shopping centers over the planet keep you entertained for hours, even if you don’t buy anything. 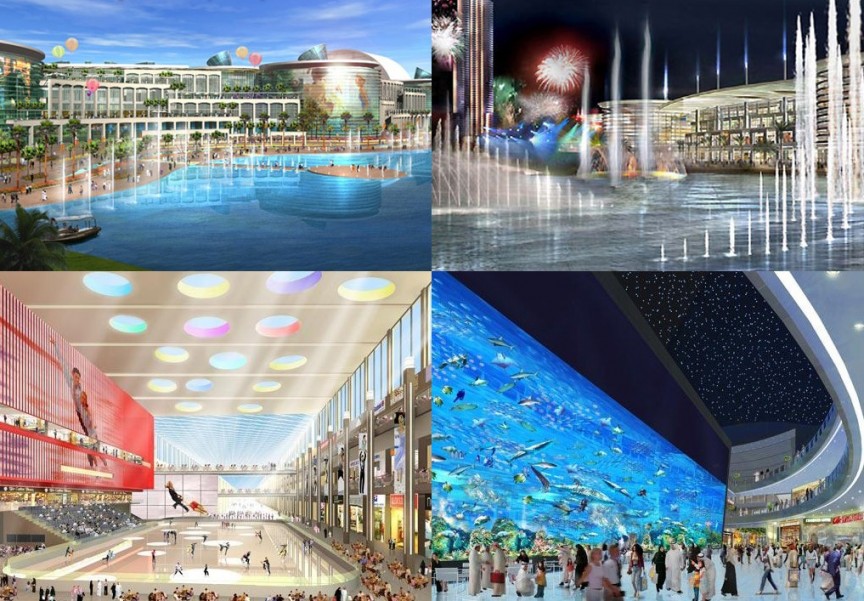 This is one of the most luxurious malls and also the largest. This doesn’t come as a shock, looking at the excesses and luxury Dubai is famous for.
A lot is going for Dubai. Beside 1,200 shops, it is home to the Discovery Center and Dubai Aquarium, Candylicious, the world’s largest candy store, a 76,000-square-foot indoor theme park, and an ice rink. Also Reel Cinemas, which offers 22 screens, is found inside the mall. Also an edutainment center called KidZania is found there. We should not forget about the Dubai Fountain, which shoots water jets up 500 feet and features 6,600 WET Superlights in 25 colors.
For the shoppers,the Dubai Mall has access to the world’s top brands, such as Alexander McQueen, Dolce & Gabbana, and Mark & Spencer. 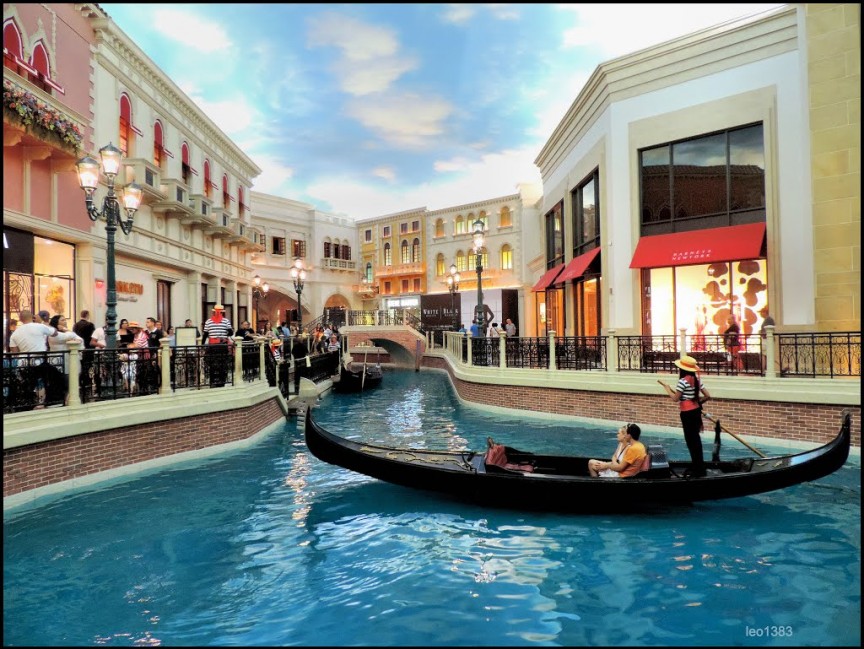 This is the only shopping center on this list that is really part of a hotel. The Shoppes at the Palazzo (known before as The Grand Canal Shoppes) is one of a kind in a couple of ways. To start off, this is a themed mall, where visitors can not just window shop, but they can do so while pretending to walk around one of the famous cities of Italy. Or enjoy the street performers walking the cobblestone streets while taking a ride on an Italian gondola.
The Shoppes is relatively small if you compare it to other luxury malls. It has 91 spaces for shopping and dining, where you will see brands, such as Diane von Furstenburg, Barneys New York and Dooney & Bourke. In spite of its size, the Shoppes attracts hundred of thousands visitors yearly, who visits for the atmosphere and attractions such as The Sands Showroom and the entertainment and shows waiting to entertain you as you leave the shops. 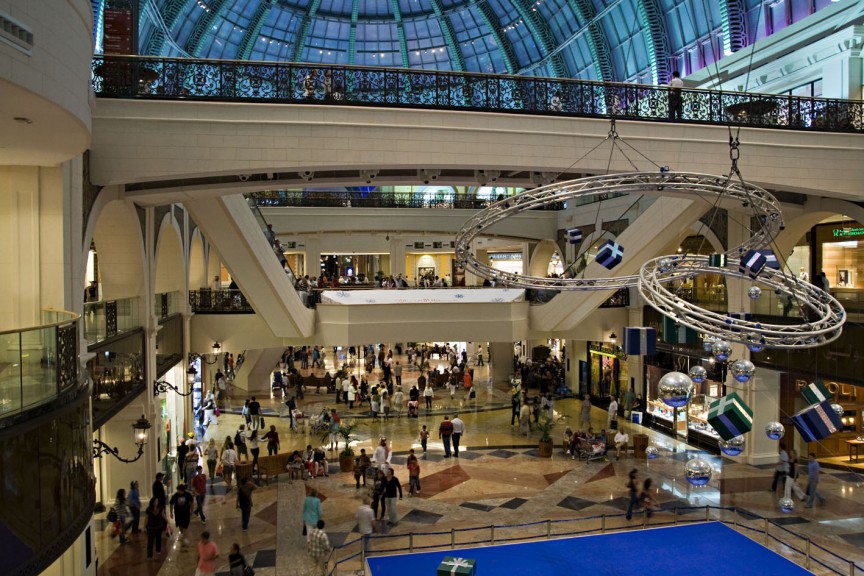 This is surely not Dubai’s largest mall, with “just” over 700 stores, but that does not say that it is any less luxurious. The mall features many choices to shop and eat (it has 90 cafes and restaurants), it is maybe more well known for its indoor skiing facility called Ski Dubai Center. The center is not only has the world’s largest indoor snow park, but it also has five slop, and the world’s first indoor black run and a chance to give tobogganing or snowboarding a try.
The Dubai Community Theatre and Arts Center, or DUCTAC for short, is also found in this mall. This is a 14-screen multiplex cinema, and an indoor family entertainment center with a 4D theater, a couple of thrill rides, and racing simulators.
Since September of 2013, the mall has been undergoing some changes. Some of the changes are an expansion of the leasable area, a larger parking space, and new dining and café spots. 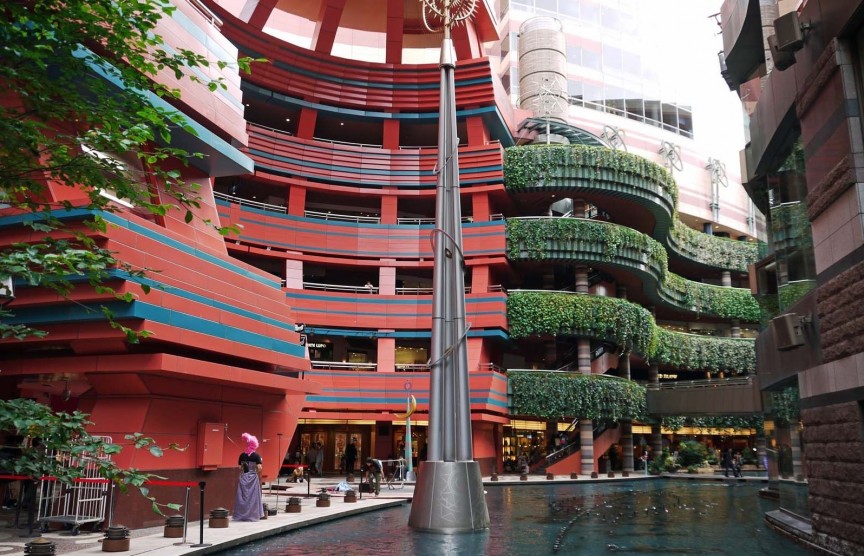 Canal City is designed to look like a city built in the canal, just like the name says. In this case, the buildings around the canals house shops, entertainment areas, and viewing areas. All the structures like lots of fountains, water features and curving sculptures are made to “trick” you into believing that you are in a natural space and not in the middle of a really bus city.
The mall has a cinema and a gaming center. It also has a music stadium, street comedic performances and even exotic art displays like metal art and more. The Ramen Stadium is the entire fifth floor of the complex which has a lot of booths selling all kinds of ramen noodles. 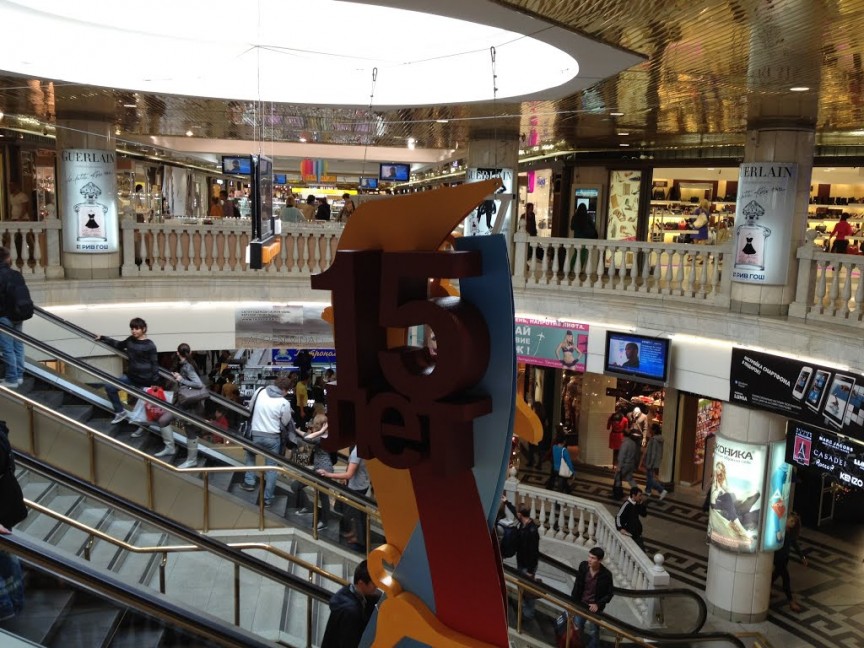 This is a shopping mall that defies explanation: the Okhotny Ryad Center has a mix of old Russian design and decadent Western luxury where a small fortune is the cost of everything. All the popular brands and also some of the middle ones are found in the hundred or so shops in the mall – from Yves Rocher to Tommy Hilfiger and more.
The best part is that the whole mall is built underground. This means that many tourists miss it and you may find yourself mixing in with a lot of locals when you are shopping here. The giant troika fountain is found at the center stage of the mall, it splashes visitors as they make their way into the mall. The mall makes up for the lack of natural light through having a lot of stained glass domes and windows that open up towards the metro station – and it shows some of the best architectural design in Moscow. 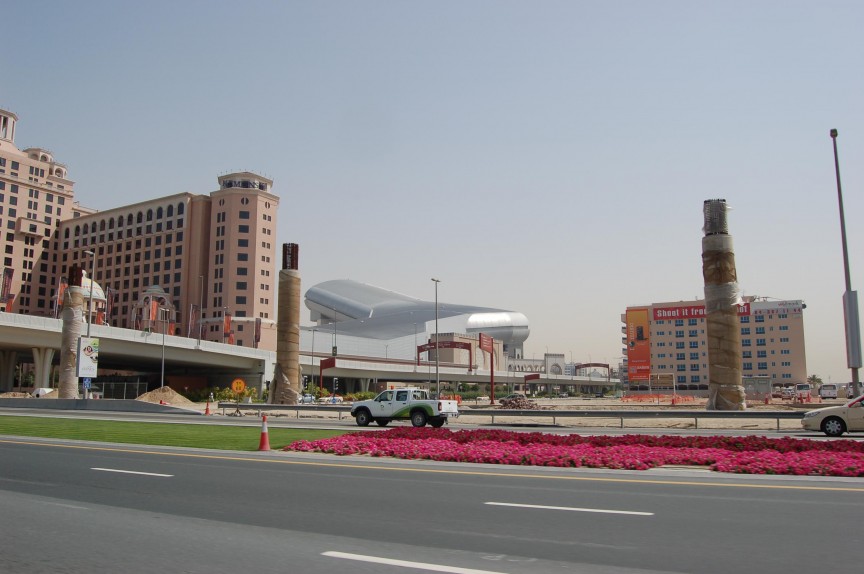 Some of the most luxurious shopping areas in the planet is found in the Emirates, and Bawadi Mall is included. While the 400 plus restaurant and shops are impressive enough, it is all the other stuff the mall has to offer that makes this place awe-inspiring.
To start off, Bawadi has a 12-lane bowling alley, a children’s play area, a multi-screen cinema, and an ice skating rink. A small indoor roller coaster is also found in the mall. Also, the Heritage Village theme park surrounds the mall. The Heritage Village theme park allows visitors to experience traditional UAE life, look at Islamic architecture and buy rugs and handicrafts. 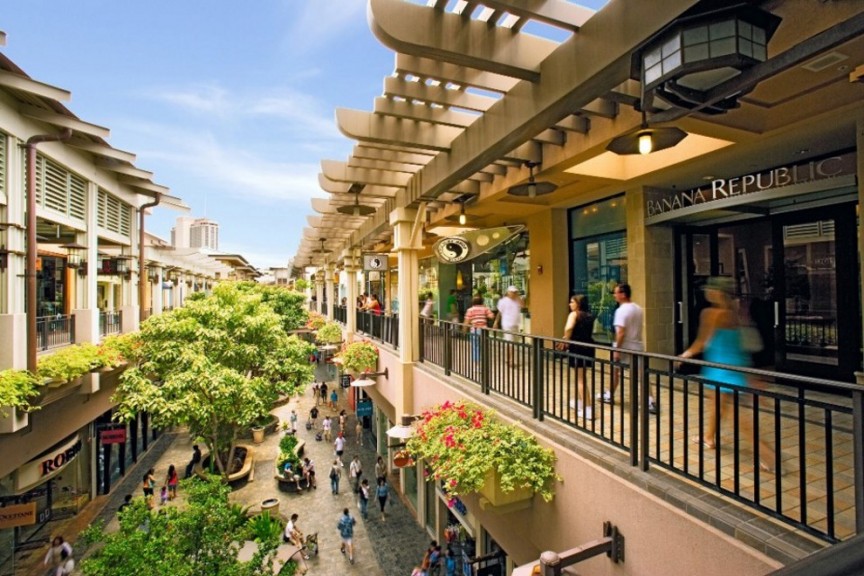 Ala Moana is the world’s largest outdoor shopping center, which has become a tourist attraction in its own sight. Besides the almost 300 booths selling traditional Hawaiian products and the foods, and the weekly farmer’s market, the mall also has an open-air stage when hula shows can be seen everyday.
Your arms getting tired from carrying bags? Get on the historical Ala Moana Shopping Trolley to move between stores or to catch a ride to a lot of places are Waikiki 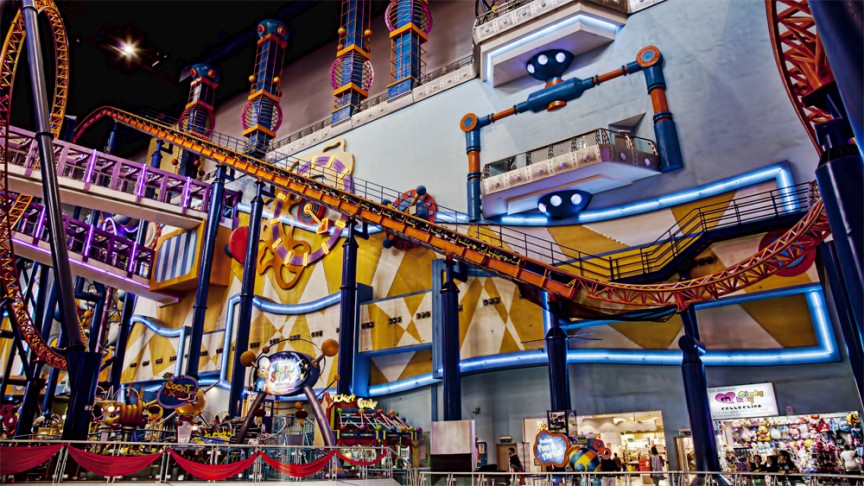 Berjaya is one of Asia’s largest malls (7.5 million square-foot) and it looks really Western. In fact, a big area of the mall is made to mimic Fifth Avenue in New York City. They even have a “pretend” subway station, to give people the magic experience of “the city that never sleeps.”
While Berjaya’s 1000 retail stores are surely spectacular, the thing that made this shopping mall a legend is the Berjaya Times Square Theme Park. This park is one of the largest indoor amusement park of Asia, and it has a couple of spinning rides, a looping roller coaster, an Octopus ride, a walk-through haunted house and a lot more. There is also an area called Fantasy Garden that takes care of young members of the family.
If that is not enough, there is a giant musical staircase, a multi-screen cinema, a kids’ theatre and a number of live events that happen all over the mall. 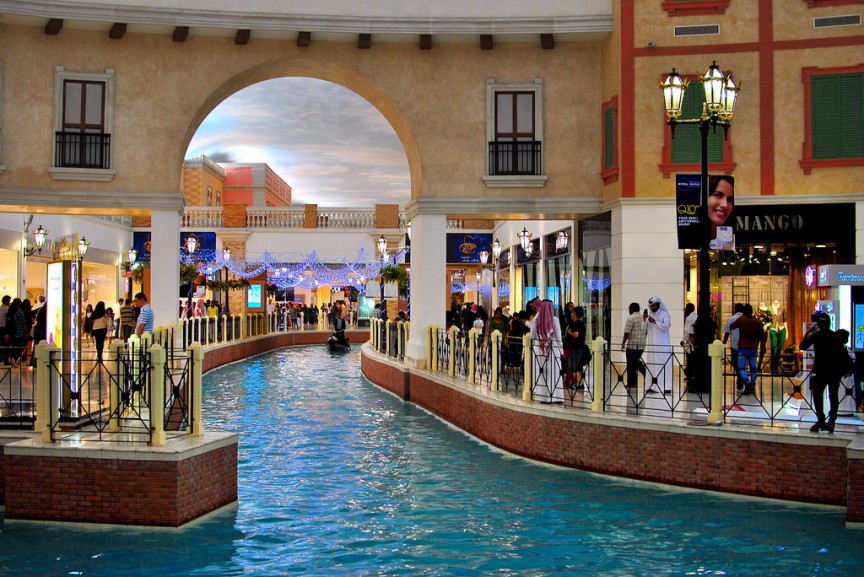 This is another shopping center that is made to look like you are walking through Venice, Italy. Villagio is just like the Las Vegas mall, there are man-made canals and gondolas and street entertainment. To add on to that, it also has a lot of areas to look like Venice at different times of the day – stroll this way for a magical morning peek of the city, then head the other way to see the magnificence to Venice at night.
The mall has a Gondolania Theme Park which has a water coaster as well as an indoor coaster, a 360-degree rotation ride, a drop tower, a Ferris wheel and a dark ride. Also, visitors can try the glow-in-the-dark bowling alley, or have some fun at the laser arena or the 4D cinema. Gondolania’s ice rink offers lessons, riding times and shows for all ages. 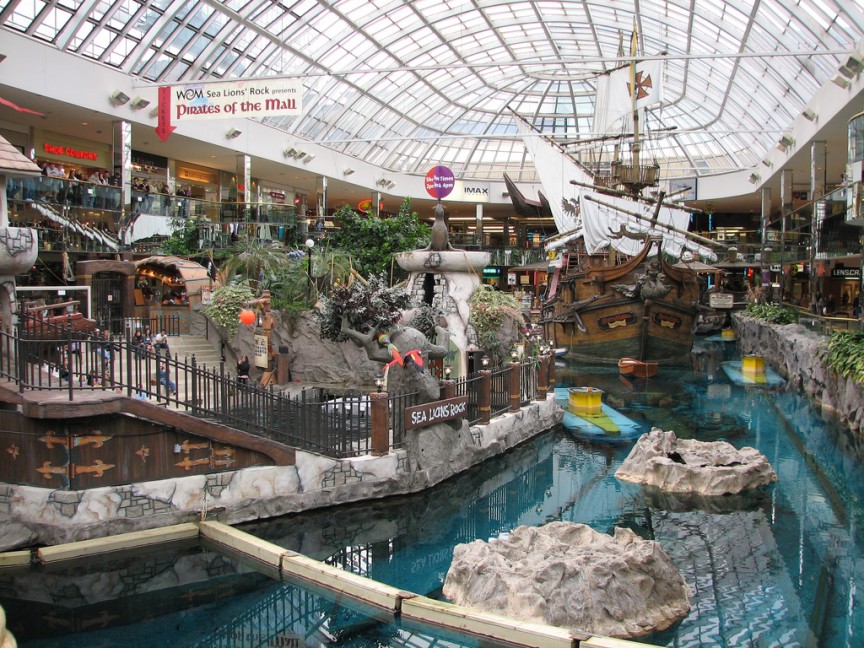 West Edmonton Mall has a couple of good things: it is one of the largest malls in the planet and it also has the largest indoor water park in the world. It also has the world’s largest wave pool, an 83-foot-high slide and a children’s play park area. If that is not enough, there is an indoor lake that has four sea lions, an 18-hole miniature golf course and an ice rink.
The Wonders of Edmonton Mall don’t stop there. The indoor shooting range is also available for visitors to try. They can also watch a movie, or spend some time at the Ed’s Recreation Center, which has inside a bowling alley, arcade games and a music stage. The indoor park GalaxyLand has 24 attractions and rides, like a 3D Theatre, a triple-loop roller coaster and a couple of thrill rides.
The mall even has an inter-dominational chapel, where since 1981 when the mall opened, hundreds of couples have gotten married.