Even though a waterfall is just water falling from a high place, it is one of the most beautiful and majestic things found in the natural earth. There is just something magical about them.
The list below doesn’t focus on famous waterfalls like the Niagara falls or the Angel falls, but instead looks at other waterfalls that are just as beautiful and majestic. The waterfalls listed here are spread over the five continents of the world.
Apart from the waterfalls serving as natural landmarks, a lot of the ones on the list have marvellous stories behind their names which help to explain how they are important to their native culture. We are certain that you would like to visit these places after reading about them here, so, without further ado, here are the 10 waterfalls you must visit in your lifetime. 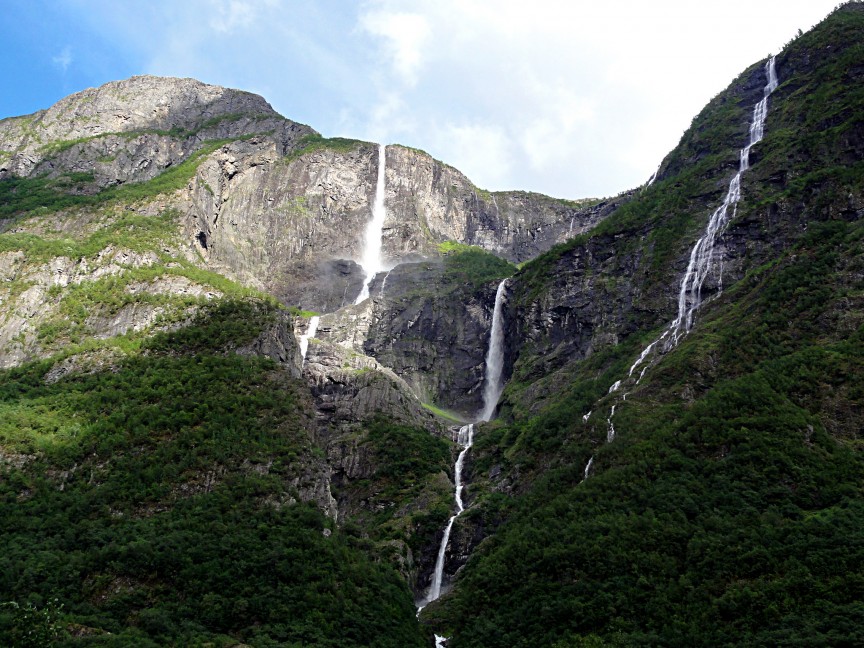 Kjelfossen is the 18th tallest waterfall in the whole plate and the tallest waterfall in Norway. It is a total height of 2,313 feet. The giant waterfall is made up of three waterfalls found close to the village of Gudvange, located at the end of Nærøyfjord. The tallest of the three waterfalls go down a height of 489 feet all the way to the fjord. A lot of tourists come to visit Gudvange since Kjelfossen location near the European route E16 allow tourists to come in easily.

The Ban Gioc-Detian Falls is located at the border of Vietnam and China. This waterfall is really two waterfalls combined that go down a total of 197 feet through Daxin County, Guangxi to Trung Khanh District, Cao Bang Province. It originates from the Quay Son River and it ends up at a big, deep pool below. Local villagers usually go to the pool to fish. Ban Gioc-Detian is one of the largest waterfalls that is located on an international border, together with Iguaza Falls, Niagara Falls and Victoria Falls. It is not often visited by international tourists, but a common place for locals to hang out. 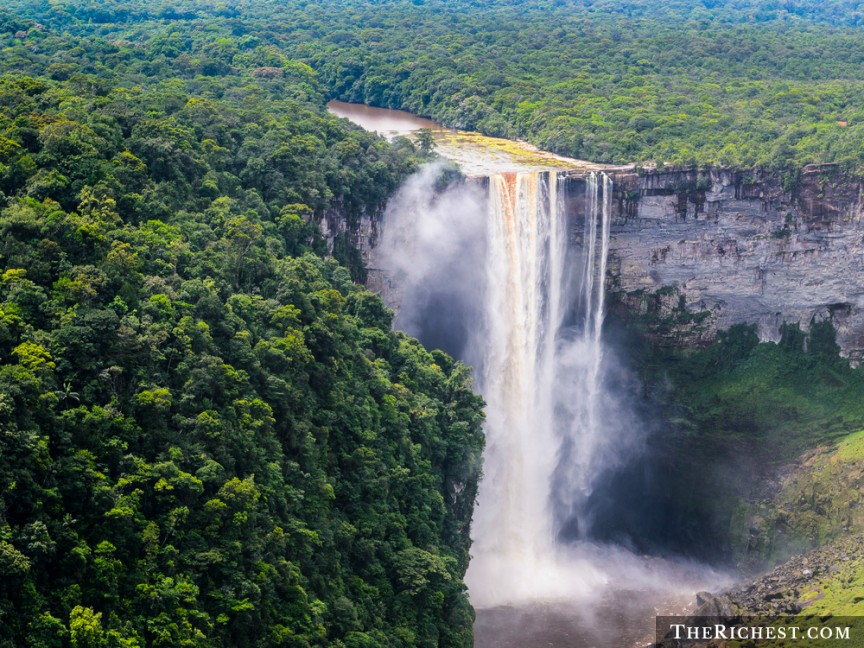 Kaieteur Falls is found on the Potaro River in Essequibo, Guyana, and it is also famous for being the planet’s widest single drop waterfall. Even though it is not seen as a part of the tallest waterfalls, having a height of 741 feet, it is seen as one of the most powerful due to the large amount of water that pours down. Not many tourists come here since it is very hard to get to. It is surrounded by the Amazonian rainforest which remain as one of the world’s most pristine rainforest areas. 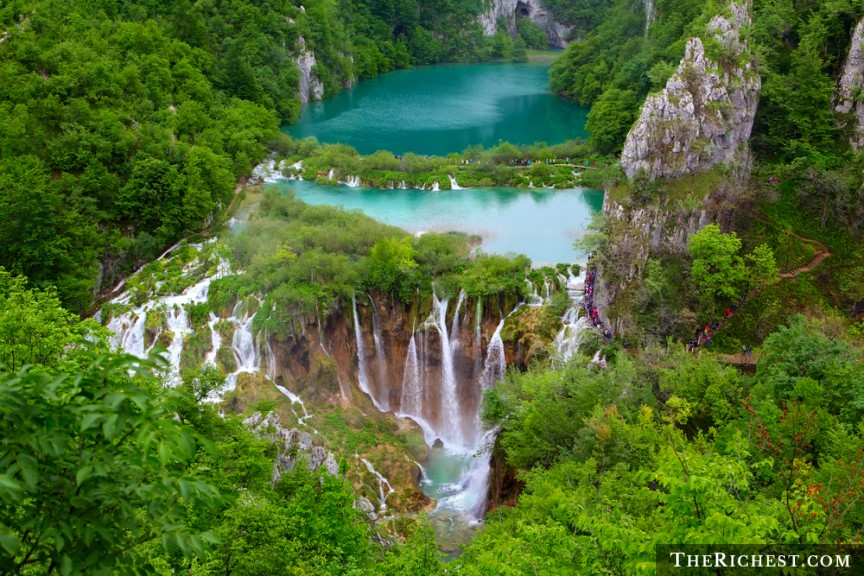 Over one million people each year come to visit the Plitvice Lakes waterfalls which is located in the Plitvice Lakes National Park in Lika-Senj County and Karlovac County, Croatia, close to the border of Herzegovina and Bosnia. The two highest waterfalls of the many waterfalls found here are the Large waterfall and the Galovacki buk. The Large waterfall goes down 255 feet and is found at the bottom of the Lower lakes while the Galovacki buk goes down 82 feet and is found at the Upper Lakes. After the second World War, the Plitvice Lakes was turned into a national park on April 8, 1949.
To add on to that, in the year 1979, it was designated a UNESCO World Heritage site. 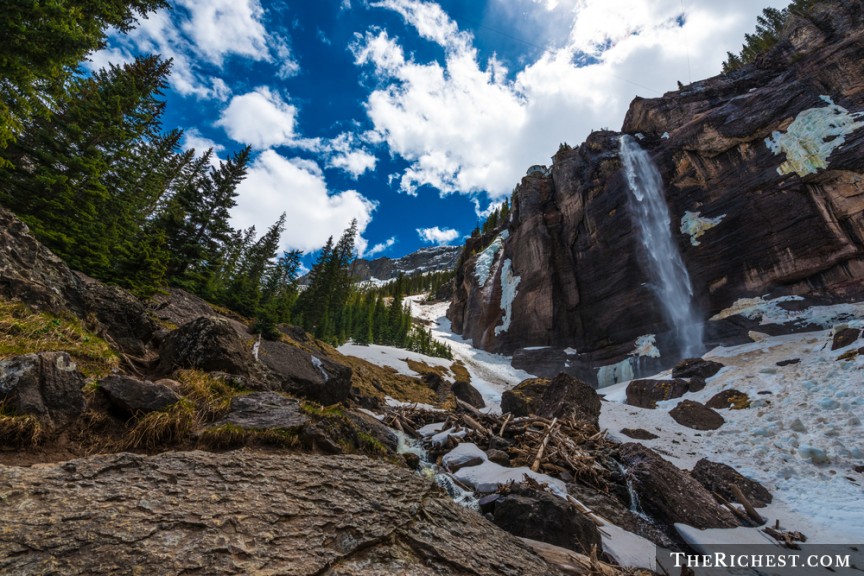 The Bridail Veil goes down 365 feet tall and it s found in Telluride, Colorado. The falls overlook the town and it also provides power to the town through a private power plant. When winter comes, the water freezes which gives opportunity for ice climbers to scale up the waterfall. Unfortunately, ice climbers can’t go to the falls at the moment since it is off limits to them, however, you can hike 1.8 miles to the falls. It is the tallest waterfall in the state of Colorado and you will be 10,000 feet off of the bottom of the waterfall once you get to the top. 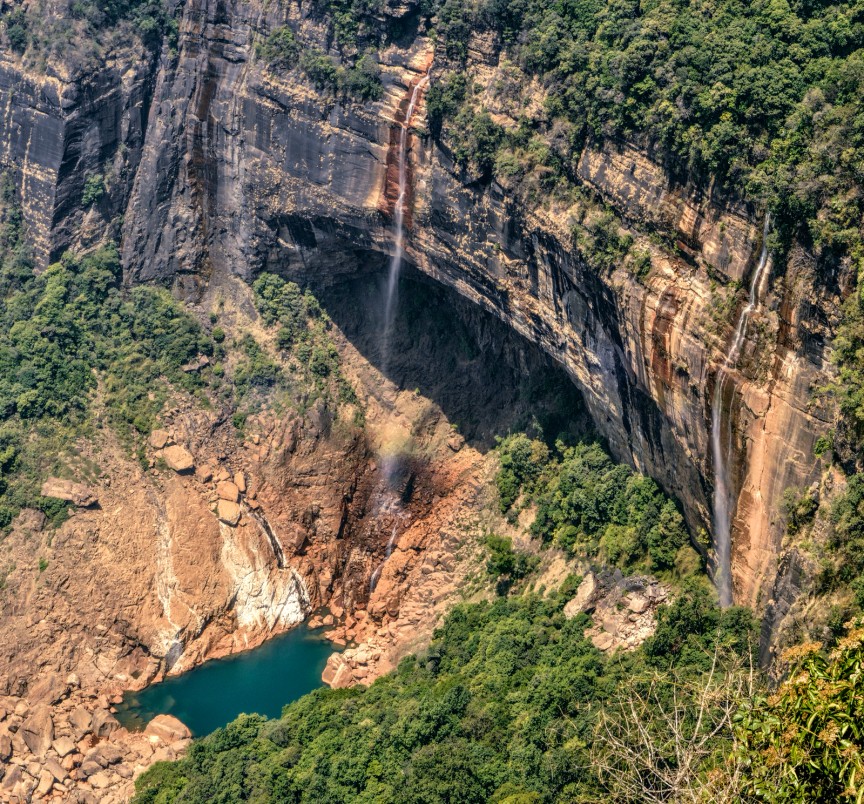 The Nohkalikai Falls is found in Cherrapunji, which happens to be one of the wettest places on the planet. It is the tallest plunge waterfall in India going down a total of 1,115 feet. When the monsoon season hits, the stream where the waterfall originates from increases its power since it is joined up by many other rivulets. The name Nohkalikai really means Jump of Ka Likai. There is a story behind this. It starts off with a woman named Ka Likai giving birth to a daughter whom she grew to love very much overtime. Ka Likai later remarried to another man but this particular man was jealous between the love between the daughter and the mother. Because of how jealous the man was, he killed the daughter and cooked her up while her wife was gathering food. When Ka Likai realized that she had eaten her daughter, she went and jumped off of the waterfall and eventually killed herself. 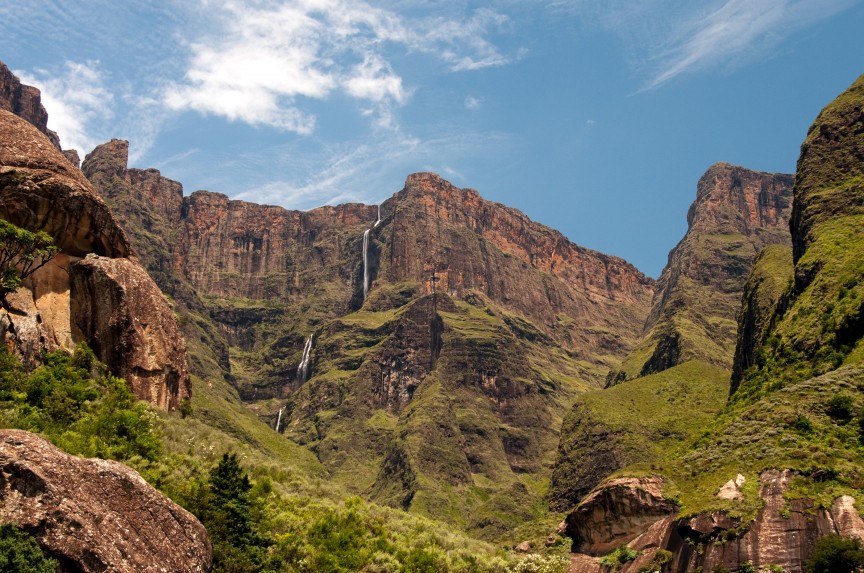 Tugela falls goes down 3,110 feet and it is found in South Africa’s Drakensberg Mountains located on the Tugela RIver. This waterfall is made up of five drops, the longest one going down 1,350 feet. It is better to visit the waterfall during the wetter season since the waterfall doesn’t consistently flow throughout the year. The Tugela Falls are the second tallest waterfalls on the planet, only being beaten by Angel Falls. The falls can be accessed through two trails which are both about four miles long. The hike is much harder than one would expect since the top of the falls is close to 10,000 feet above ground. 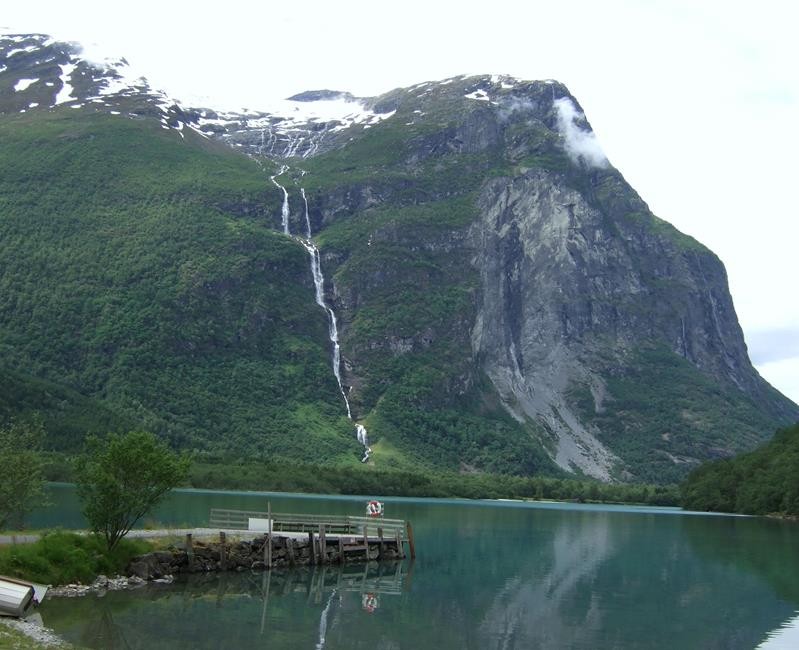 Ramnefjellsfossen, more commonly known as Utigardsfossed, is found in Norway and goes down 1,919 feet or if you include the cascades below, then it goes down a total of 2,685 feet. It is the eleventh largest waterfall in the world if you assume that we are including the cascades. The name of the waterfall originates from a cliff next to it. The story behind it is that in 1905 when a large avalanche fell all the way from the cliff to Lake Loen below it. This avalanche cused a tsunami that travelled over 130 feet and destroyed lots of villages that were in its way. The Ramnefjell glacier is where the water originates from. 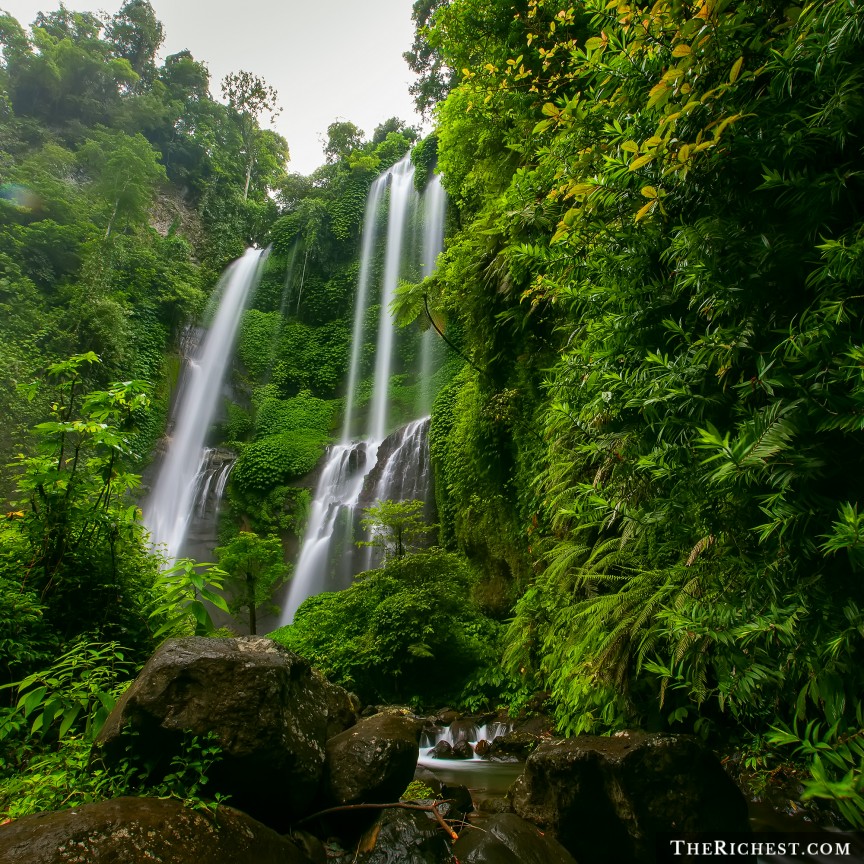 Gullfoss is one of the most popular waterfalls and it originates from the Hvita River. This waterfall expands the whole width of this river. “Golden Falls”, the translation of Gullfoss, is seen as one of the most beautiful falls out there. The Gullfoss is a total of 100 feet and it is made up of 2 drops. There is an interesting story behind this waterfall. An Englishman rented the waterfall back in 1907 from the owner at the time by the name of Tomas Tomasson. The waterfall was then seeked by investors so that they could use it as a way to produce power. But Sigriour Tomasson, the daughter of the owner, was totally against the idea which led them to go to court. Unfortunately, the daughter lost and the rental contract proceeded as planned. Lucky for her though, the investors didn’t have enough cash and the project did not go through. In 1979, the waterfall was turned into a nature reserve.