For decades, if not centuries, cigar clubs have been built all over the planet. Some are expensive to get into and very luxurious, while others are small and even shabby. During the mid-1990s, cigar club started to gain popularity since many businesses put a ban on smoking in their organizations. Because of that, smokers had no choice but to look for somewhere else to smoke in public. In the end, they went for cigar clubs.
Cigar clubs are of different kinds, some allowing only the smoking of cigars, while others allow the smoking of both cigars and cigarettes. Most of the cigar clubs that we will see and talk about on this list are cigars only, because they are higher-end and very costly to get into. Expensive cigar clubs are found all over the world, but most of them are found in big cities in New York, California, Nevada, the United Arab Emirates, France, Germany and the United Kingdom. Also, these higher-end cigar clubs are more than just cigar clubs; they are basically entertainment centers. Guests can smoke cigars and talk, while also playing games like cards or pool, and also going to the bar for a high-end drink.
Although we have talked about where most of the expensive cigar clubs are located, there are some costly ones not found on this list. They can be found in Quebec, Canada (which banned smoking in indoor public locations, except in cigar clubs and alike organizations), Australia(in big cities as the ones listed above) and t=in the United States, mainly in Florida, Miami, Ohio, Cincinnati and Chicago, Illinois. With all of that said, let us see the ten most expensive cigar clubs in the whole planet. 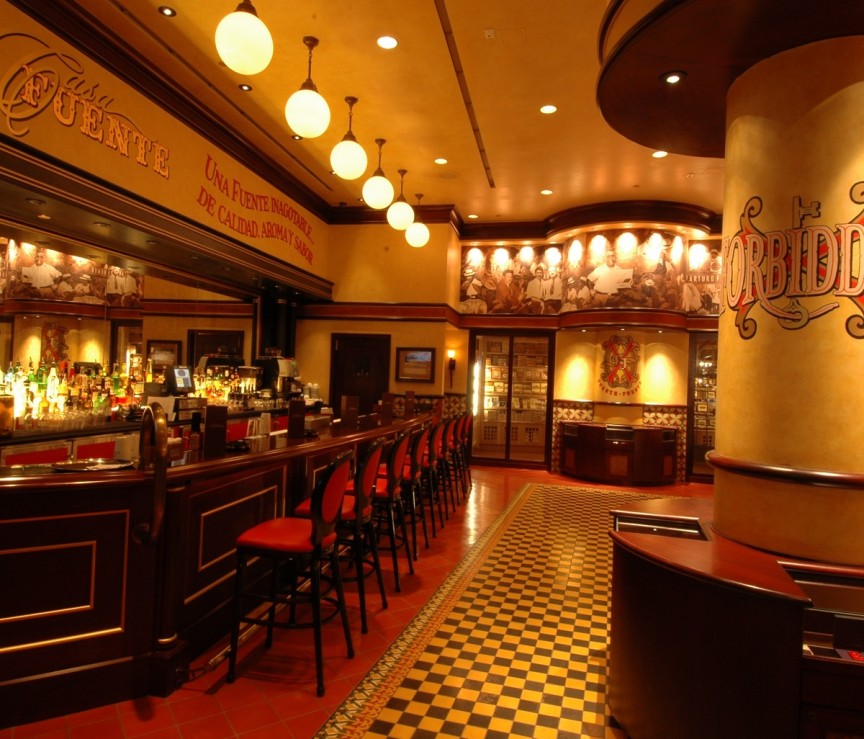 Casa Fuente is famous all over Las Vegas, for being very energetic and exceptionally luxurious. It is one of the most popular expensive cigar clubs in Las Vegas. This cigar bar is an excellent choice for those who choose to smoke their cigars in peace and away from their stress in life, since it has very comfortable furniture and it is extremely luxurious. Apart from that, there is a bar that serves a large selection of drinks. It is located on the Las Vegas Strip. Casa Fuente will not be going out of business anytime soon. 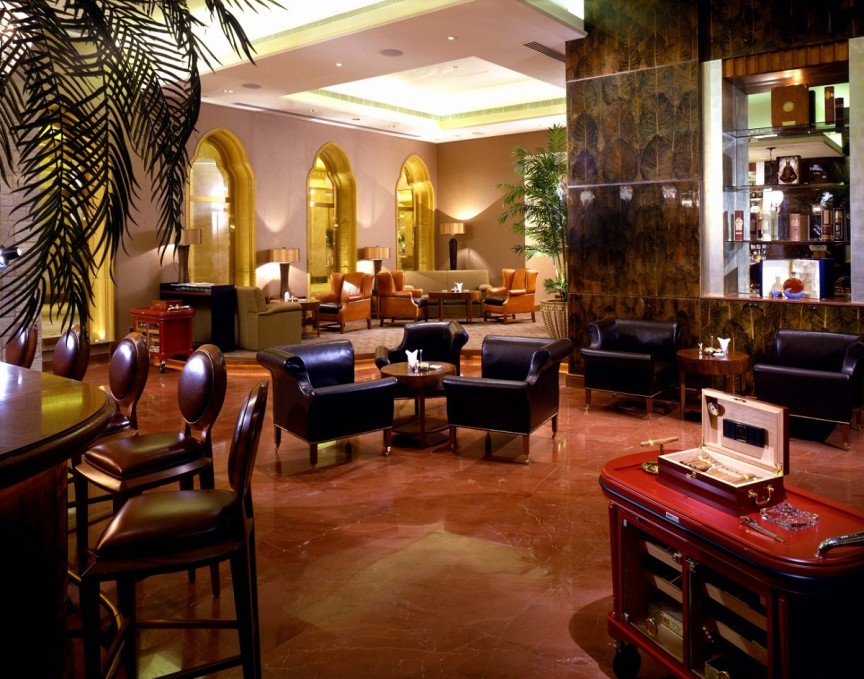 Cigar Cloud Nine is not only a cigar bar and entertainment center, but also a restaurant. This cigar bar is located right along the beach in Abu Dhabi, so you can look out at the vast blue sea while enjoying a cigar. There is also a variety of food and beverages sold at the bar, such as champagne, cognac, cocktail, caviar and oysters. If you like smoking your cigars at a high-end club during the day, you have to keep looking because this club is only open from the evening until early morning. 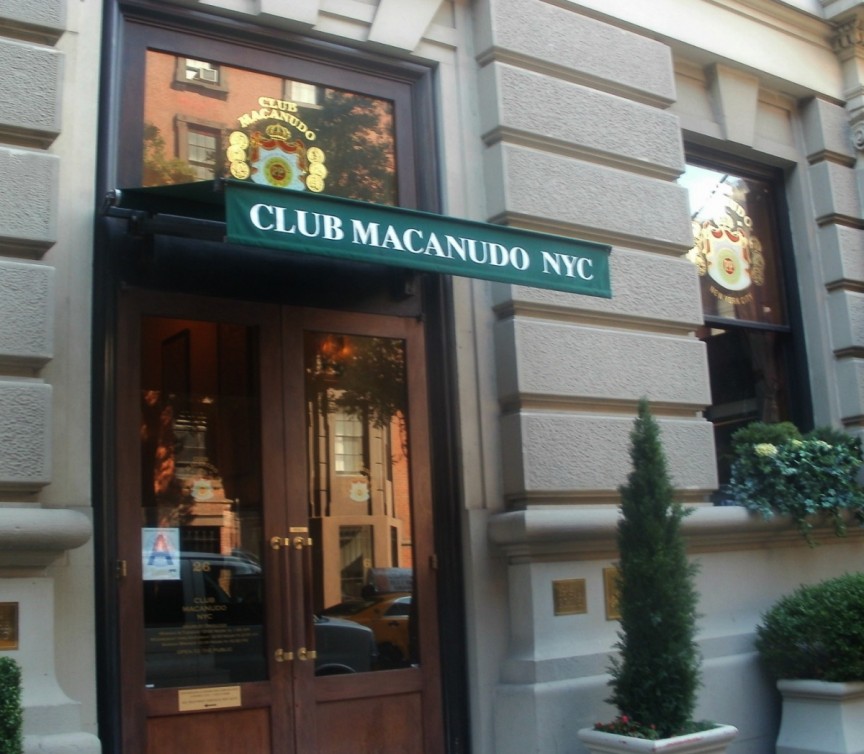 This is one of the most popular high-end cigar clubs found in the entire state of New York. It is found in the heart of the city, the Upper East Side of Manhattan. Manacudi is also a uncommon cigar club where non smokers can stop by also, to visit friends, have some ofthe drinks or enjoy a romantic evening with a loved one. Guests must follow a very strict dress code, making it stricter than usual cigar clubs. 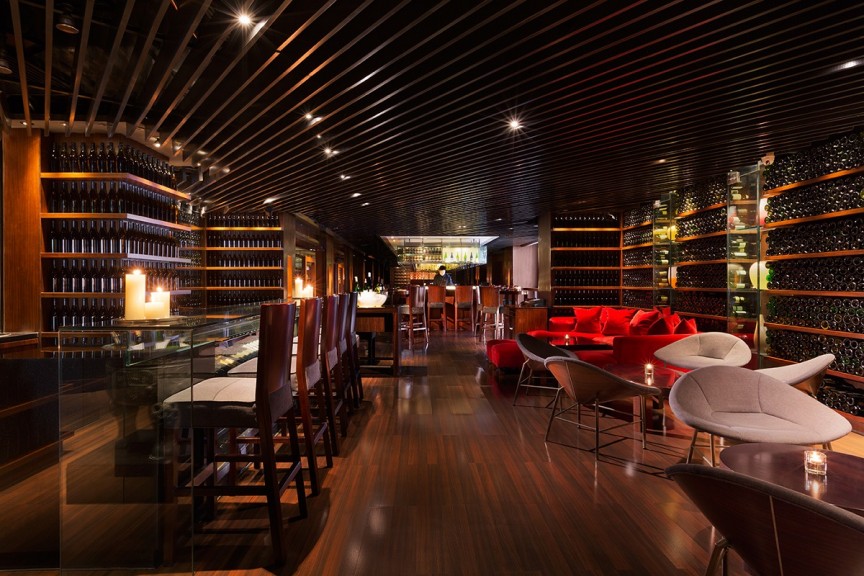 This club is also a restaurant, same to Cigar Cloud Nine. However, the amount of space that serves as a cigar area only is fairly large. The bar has a choice of high-end, foreign forms of wines, cocktails and whiskies. The Chinese music that plays here adds to the whole experience. Generally speaking, Redmoon has a very Oriental feel and theme to it, making it much more unique than your normal cigar club. Also, you can visit this bar throughout the day from noon, which is not likely for many other cigar bars. 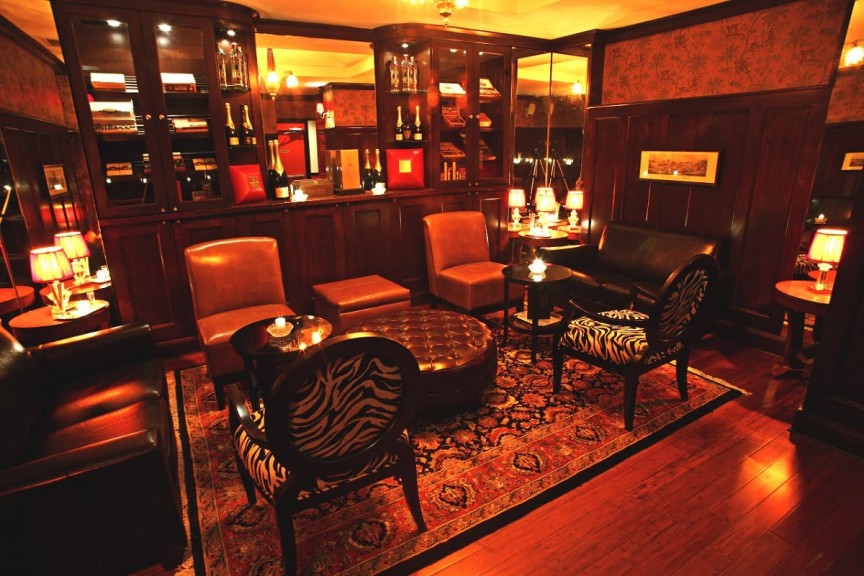 This is not usual cigar bar. You come here strictly for business, not for entertainment. There is no food, bar or appetizers. However, there are many varieties of high-end cigars, a lunge and many private rooms for meetings to be held. 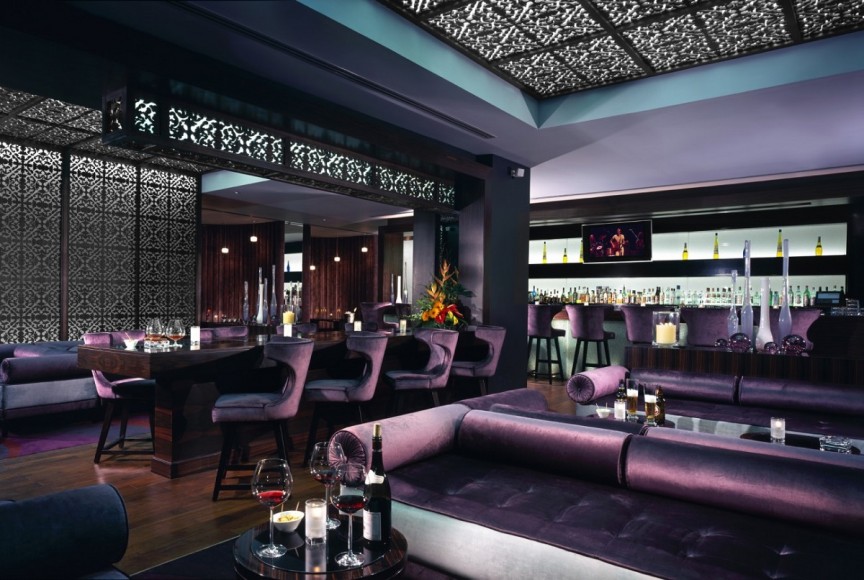 This cigar club has a golf course and a hotel, so it already it is unique from other cigar clubs. What makes this a true entertainment center is that there are many different types of games to play, from pool to cards to billiards, and also a golf course where visitors can play with their friends a competitive games, after picking from a large number of high-end cigars that you could not find anywhere else. The furniture here is also really comfortable, making it possible to relax after having some fun playing games. 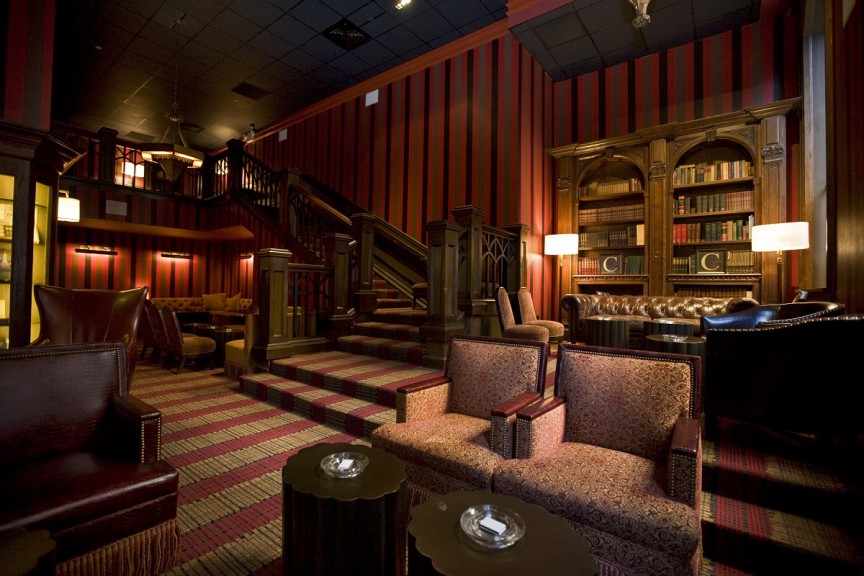 This is probably the most costly and highest end bar in New York City. Some of the most costly and rare cigars can be found here. It is set wide apart not only from cigar clubs in New York, but also around the planet, because of its interior Gothic design. Also, there is a bar that offer a number of very exotic drinks and cocktails. 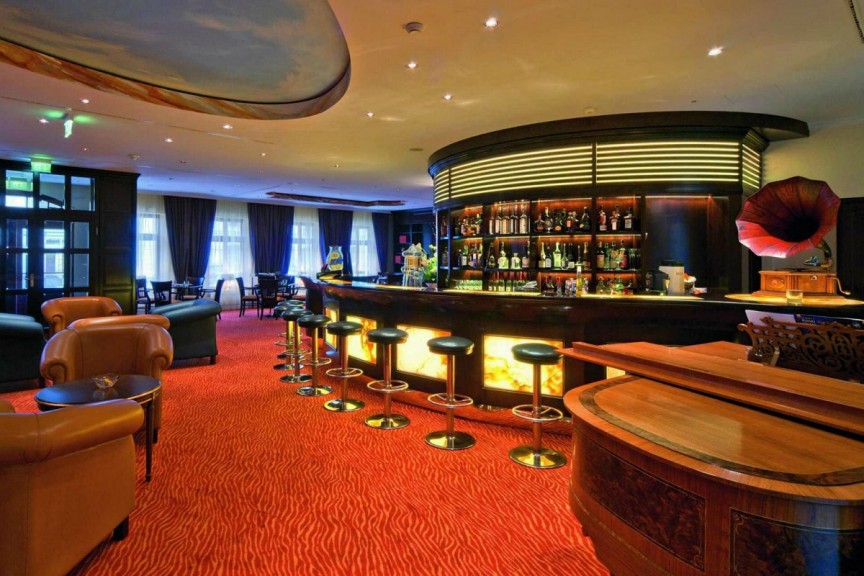 This is thought of by many to be the largest cigar club in Germany and one of the largest in Europe. Over the past ten years, this bar has received many bar awards, which without a doubt attributed to the very deluxe décor, large menu, comfortable furniture, an excellent choice of expensive drinks at the bar and a extremely calm cigar lounge. If one of your personal quest is to visit as many cigar clubs as you can, you have to go to this one. This cigar bar is definitely more a evening and night bar, since it is opened every day in the middle of the afternoon. 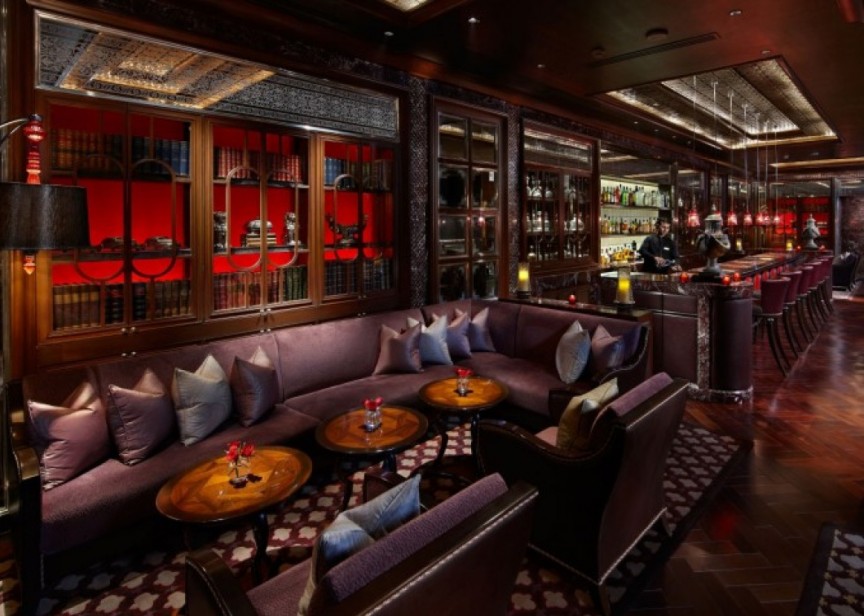 The amazing thing about this cigar bar is the beautiful interior, made up of quality leather chair and couches, and also a menu dedicated only to cigars. Apart from the cigar menu, there is another menu with a large variety of Arabic and Italian foods and cocktails. There is a golf course outside right next to the beach, so it is not that hard to spent a full night here and have fun. It is also not hard to figure out why this is one of the most expensive cigar clubs in the entire planet. 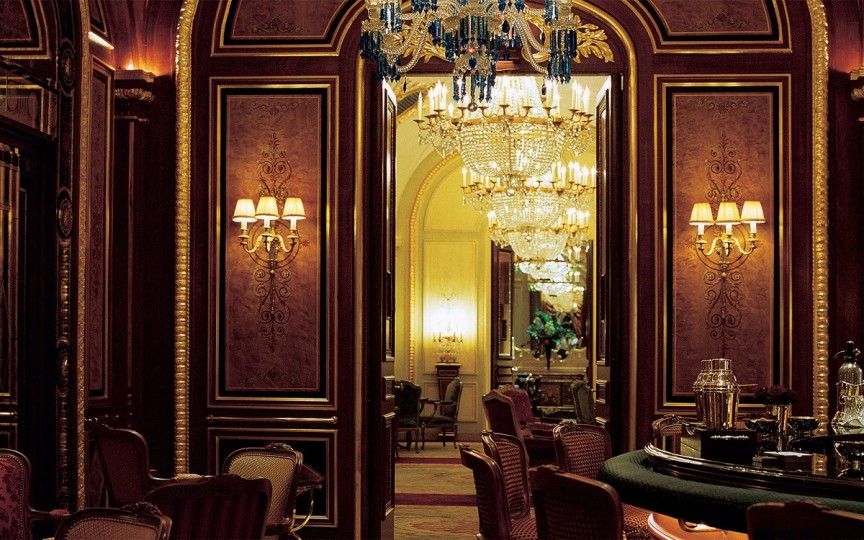 While it is not easy to know which is the most costly cigar club in the world, a very likely answer is the Garden Pavilion found in London, situated at the Ritz Hotel. Visitor can choose to stay outside in the beautiful green garden, or sit inside in the decorated and luxurious interior. There are not a lot of cigar clubs in the planet that has a large number of cigars, the Garden Pavilion is easily the most expensive and high-end club in the United Kingdom. This cigar club is opened from early afternoon to dawn, making it a very night oriented bar.