Some things that fill your stomach may include driving up to McDonald for a burger or buying some comfort food at your local Mom and Pop restaurant. Other times, something a little more unusual looks attractive, and only the most remote and inaccessible restaurants will satisfy you. If you are the type of person who loves a bit of rush before dinner, you will definitely find what you are looking for in this ten restaurants – there are some of the most hard to access in the planet, reason may be because of excessive travel time or how much physical activity you need to reach them. After exhausting hikes, long airplane flights, boats riding through rocky seas and adrenaline pumping through your veins, you will surely feel like you have earned your meal. The view is just a bonus – the most beautiful scenery you can think of surrounds these remote restaurants. You’ll be really tired from traveling, however, these ten restaurants will, without a doubt, be an unforgettable experience. 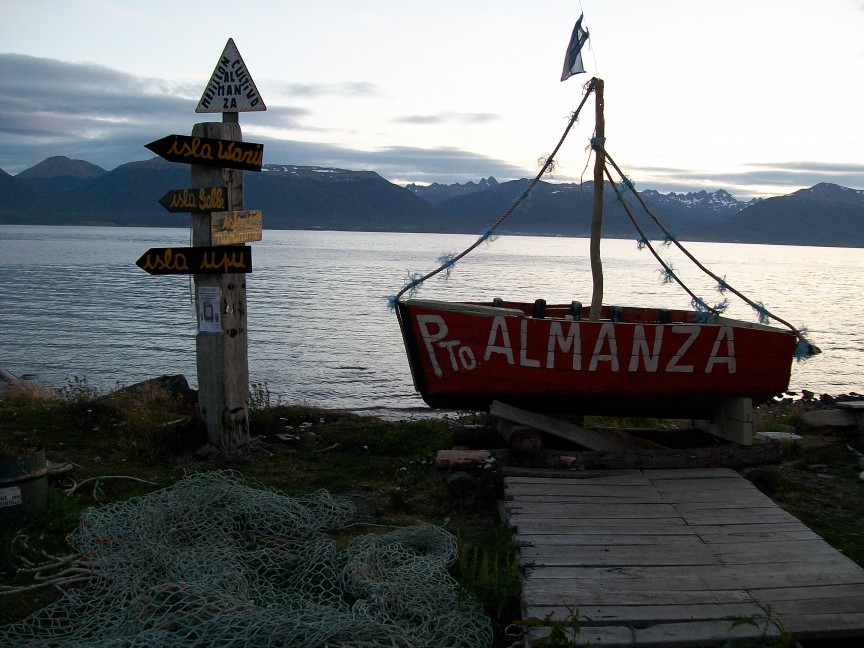 This restaurant is found on an island known as Tierra del Fuego, located on the southernmost tip of the South American continent. It can be found in one of the southernmost cities in the planet, called Ushuaia. “Land of Fire” is Spanish for Tierra del Fuego and it is regularly associated with the end of the world. Tierra del Fuego is one of the last preparation points for the expeditions to Antarctica, and it could be tough to make your way there. There are is a number of restrictions, thus making the island much more inaccessible. If you manage to make it to the end of the world, make sure you get some food from the best restaurant in Ushuaia, La Mesita de Almanza. 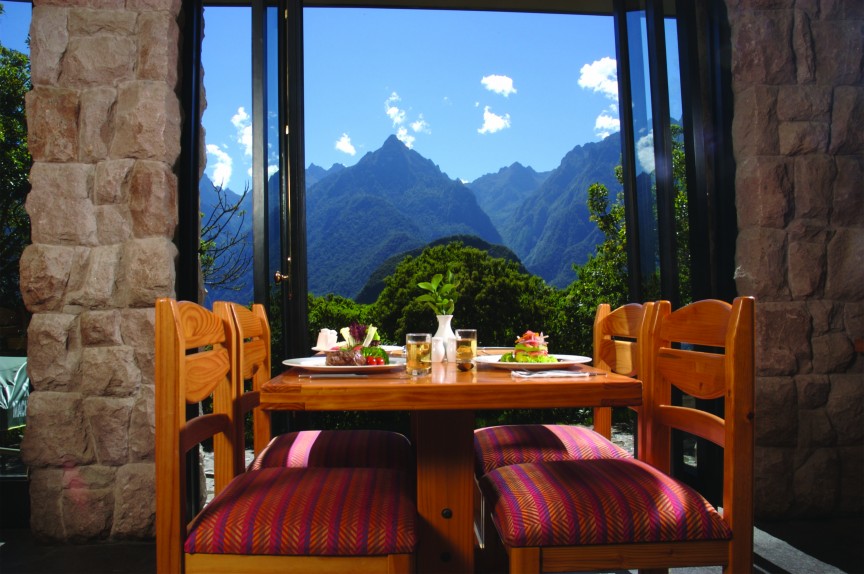 Even if Machu Pichu is accessible by a minibus or a costly train ride, the most difficult and best way to get to the ancient site is by hiking Peru’s most famous trail. It takes 2-4 days to hike the Inca trail and it has to be booked months in advance because of its popularity. To add to this, it is not allowed to hike the trail by yourself or with a small group; you have to travel in a group with a tour agency. Getting to Machu Pichu is a long and costly journey. However, ancient history, delicious Tampu and outstanding views will greet you. 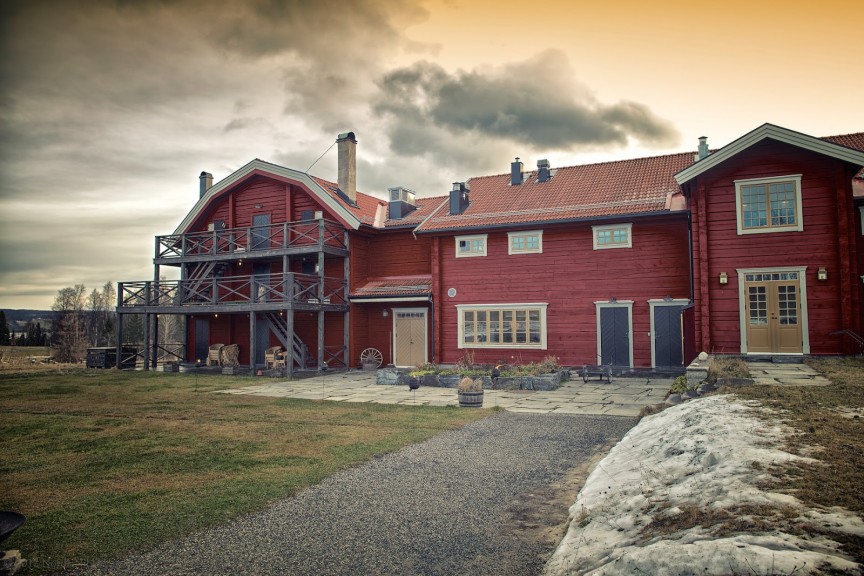 Only twelve patrons are served a night by this place. A man known as Magnus leads his team to harvest and prepare all the ingredients that are put into food. Also, a tiny restaurant is run by him. While the food may be exceptional, reaching Fäviken is the hard part. Järpen, Sweden is where this restaurant is found and it is really isolated. A six hour drive separates you from Stockholm and the restaurant, and much of the drive is along a rickety single lane road. Fäviken is the middle of lakes, mountains and farmland, giving it its well deserved air of isolation, keeping in mind the amount of time needed to get there. 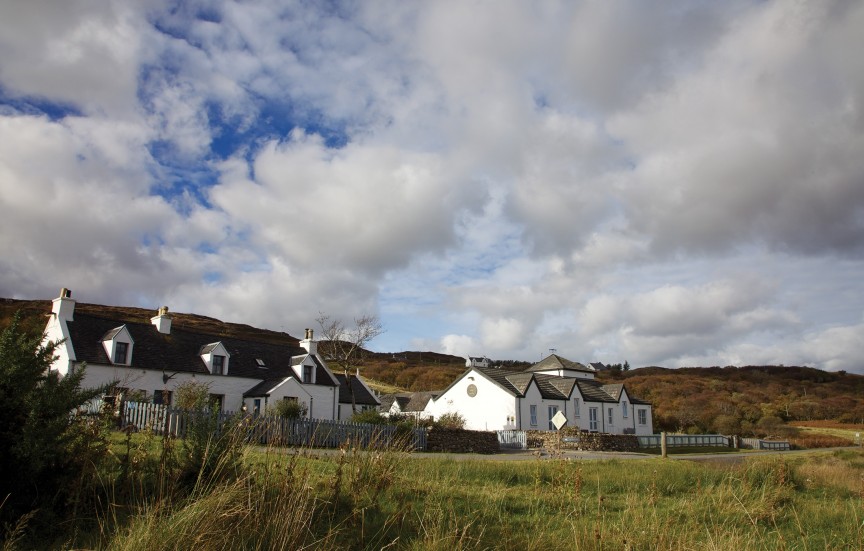 Scotland is a moderately small country with just over 5 million people living in it, which makes sense that it would have one of the most remote restaurants in the world. Found in the Isle of Skye, The Three Ice chimneys has been running for three decades and it is really hard to reach – Glasgow is the nearest airport, which is a sic hour drive and a ferry ride away. The Three Chimneys is also another hour drive from the largest town on Skye, Portree. Despite how much work the journey is, it will be worth it. The restaurant serves fresh local food and has received numerous awards and international fame. 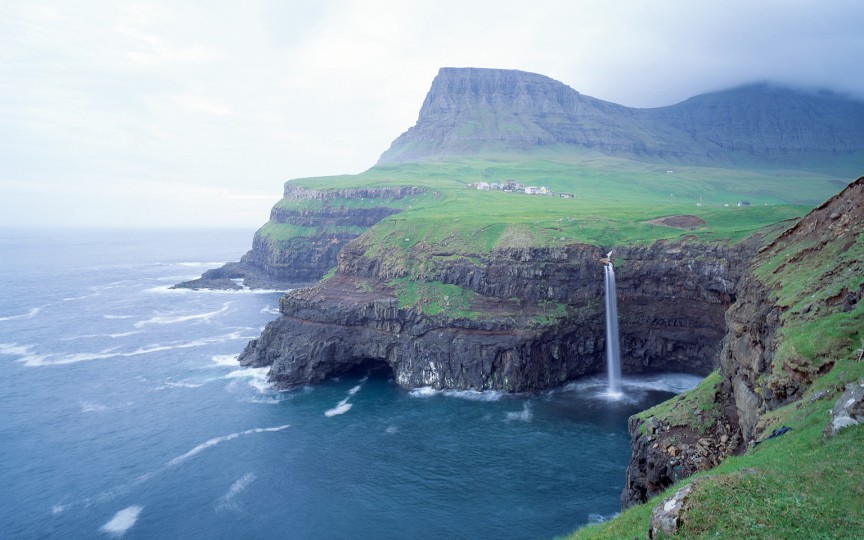 First of all, the Faroe Islands are hard to reach. They are found halfway between Norway and Iceland, they are rather isolated. If reaching the islands is a labor of love, it is even harder to get to Nordasti Hagi. The restaurant can only be reached by walking or taking an off-road vehicle – traditional roads don’t go to the restaurant. After driving in an off-road vehicle across an unpaved moor for 45 minutes, determined people must continue on foot for another 20 minutes. The restaurant is found in a rustic farmhouse which is about a century old. The lack of flashiness is in keeping with the strenuous journey. 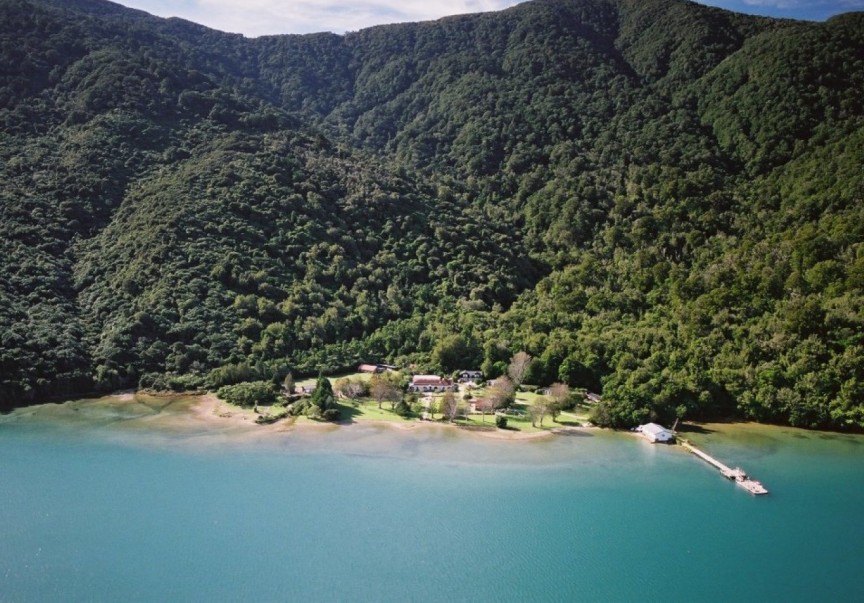 Found in New Zealand’s remote Marlborough Sounds, the Furneaux Lodge features a similarly named Furneaux ar and also the Howden Room Restaurant. The lodge and its two restaurants are really secluded and can only be reached with a boat – ther eis not even one road that goes to the Furneaux Lodge. The place is known for its untouched wilderness, where outdoor activities like hiking and mountain biking are appropriate. The energetic activities in the open air will increase your appetite for delicious foods at one of the two lodge’s secluded restaurants. 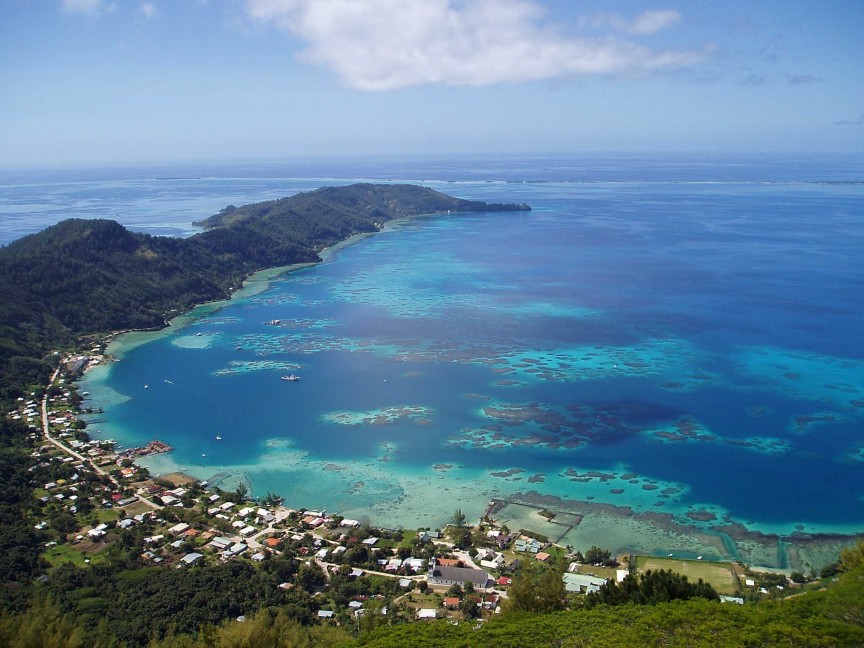 Pitcairn Island is really hard to get to, and it is actually the least populated jurisdiction in the planet. Located right in the center of the Pacific Ocean, the islands can only be reached by boat, and even that can be hard due to sharp cliffs found on much of the shoreline. To get to Pitcairn Island, you must first fly to Tahiti, then to Mangareva, then lastly take a boat to cover the last 300 miles. Once in a while, a lonely cruise ship will by the island is left alone for the most part since it is only home to 50 people. However, the island has a relaxed café and a bar called Christian Café. After hours of travelling, a meal at Christian’s would definitely satisfy your appetite build up during the travel. 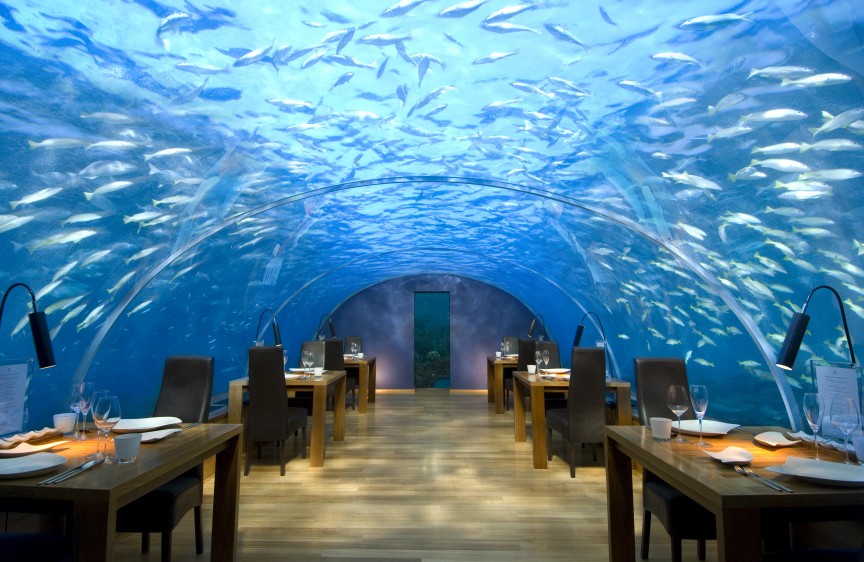 The swanky Ithaa is the first world’s underwater restaurant. Found on the coast of the Maldives, Ithaa, which means “mother of pearl,” can be found fifteen feet under the surface of the sea. Glass makes up the ceiling, which allows visitors to spend their meal as they look at the beautiful underwater life which includes sting rays, tropical fish and sharks. The restaurant is inaccessible because of location and price: the stunning Maldives are pretty secluded, and the menu is anything but cheap. !4 people can eat at this restaurant at a time and many people look for this restaurant, so get your reservations in advance. 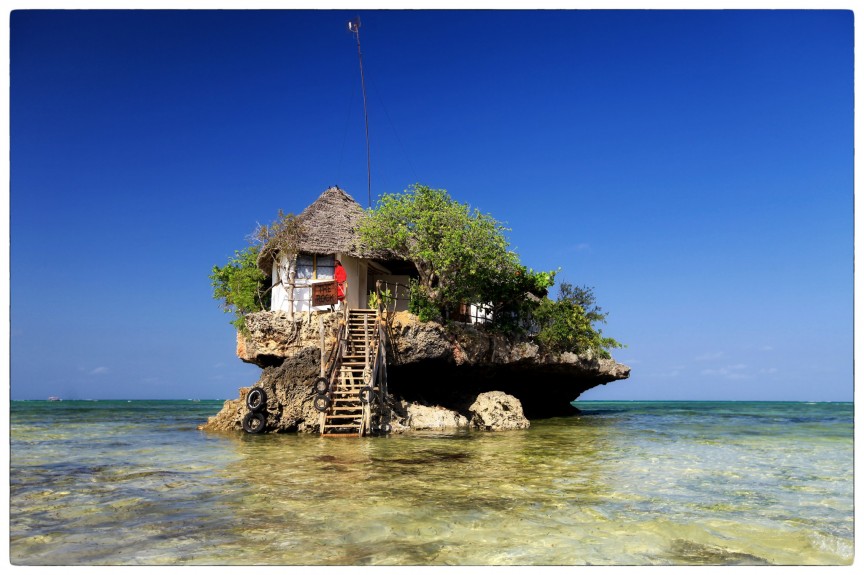 The Rock opened in 2010 and is found on a rock just outside of Zanzibar Island, hence its suitable name. The nearest town is fifteen- minute drive away, which is pretty good, but reaching the restaurant itself will be the weirdest part of your trip. The Rock depends on the sea itself – during high tides, the only way to access it is by boat, but during low tides, patrons can get to the restaurant on foot. Depending on how much time you spend there, you may have to use both methods. The unusual journey is surely worth it for the fresh sea air and the stunning 360-degree views. 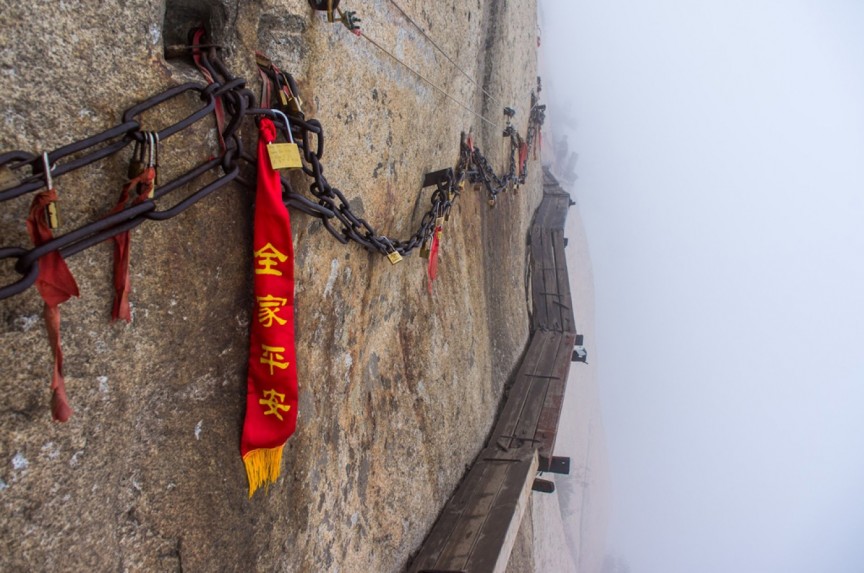 The teahouse on top of Mount Huashan is at the top of this list because of the amount of adrenaline that the trail will pump into your veins. The first step to reach the teahouse is to take a gondola ride from base to southern peak. This part of the trip can’t compare to the hike that comes after. The path to the teahouse follows one-foot plank of woods that are nailed precariously to the side of the mountain, with only chain to hang onto, moves to toe holds carved into the rock, and culminates in a long series of stairs. A hot cup of tea is certainly necessary to calm you down after the dizzying climb.