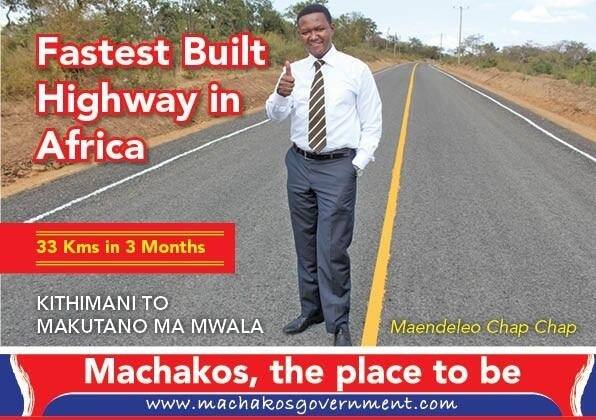 33 kilometers in just 3 months. This is the fastest built highway in Africa. The road is from Kithimani to Makutano ma Mwala and it cost sh650 million instead of the sh1.3 billion after corruption.

This road will help in transportation within the area and improve emergency service response within the area. Alfred Mutua says the good roads within the county has increased security since police response time has been reduced to between 5 and 8 minutes. According to the governor’s office, police recently received new communication gadgets and better housing at a cost of sh200 million.

Machakos County has over 120 new police cars 500 CCTV cameras plus 5 control centers. The area already has become a sweet spot for event organizers and merry makers. Major sporting events such as Masaku 7’s are attracting thousands of Kenyans to the area.