NTV, KTN and Citizen TV have gone on a media blackout. Nothing is showing on all platforms. So since there is no work to do, the employees didn’t come to work. Check the how empty the NTV offices are. 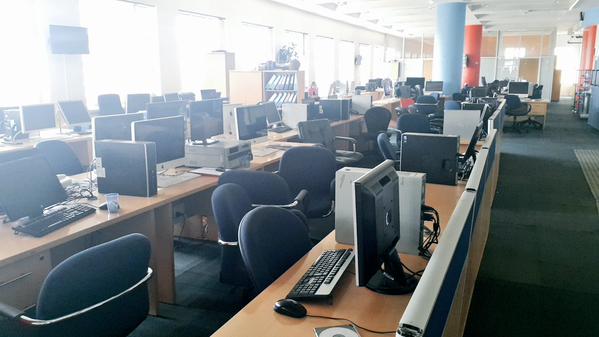 This is the press statement by the media houses:

PRESS STATEMENT BY THE NATION MEDIA GROUP – NMG, STANDARD GROUP LIMITED – SGL, AND THE ROYAL MEDIA SERVICES – RMS.
SUBJECT: THE TRUTH ABOUT ANALOGUE SWITCH OFF
We have read the statement by Cabinet Secretary for Information, Communications and Technology Fred Matiang’i and here wish to provide the accurate account of the events around digital migration, including the forceful shutdown of analogue transmission for NTV, KTN, Citizen and QTV;
1. On Saturday the 14th of February 2015, at around midday, officials from the Communications Authority accompanied by armed policemen made forceful entry into the NTV, CITIZEN, KTN and QTV transmission stations in Limuru and dismantled and carted away equipment.
2. The three media houses have been broadcasting on ANALOGUE platform and the dismantling of the equipment by the CA in Limuru effectively switched off our transmission. We have NOT been broadcasting on digital and the application that was before the Supreme Court was about being afforded adequate time to order, import and install digital broadcast equipment.
3. The forceful shutdown of analogue broadcasting was clearly calculated at forcing the three media houses to avail their signal for distribution by the government-owned SIGNET and the government’s preferred Chinese-owned distributor Pan Africa Group PANG that also operates Pay TV service Star Times.
4. Forcing the three media houses to avail their channels to either PANG or SIGNET will be inconsistent with the right to carry their own content as provided by the Self Provisioning Licence reinstated by the Supreme Court on Friday the 13th February 2015.
5. It is incomprehensible that the ICT Cabinet Secretary and the Communications Authority choose to blame the three media houses for a broadcast switch off that the government and the regulator is entirely responsible for.
6. We note with concern that the statement by the Cabinet Secretary is laced with threats aimed at intimidating the three media houses into giving in to the contentious, pre-determined and altogether unacceptable position taken by the Communications Authority on digital signal distribution.
7. Finally, to our viewers, we regret the inconvenience caused by the unfortunate developments arising entirely from the gross mishandling of the digital migration process by the Communications Authority and other forces. The three media houses have been and will always remain committed to digital migration and we are doing everything possible to get your channels back on air.
NTV, CITIZEN, KTN and QTV.