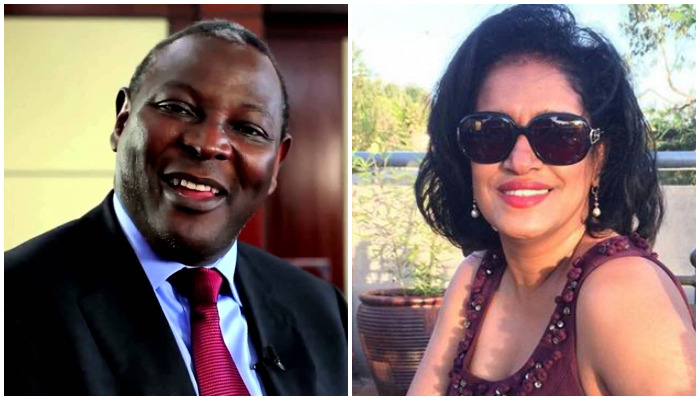 Yesterday businesswoman Esther Passaris, famously known for Adopt-a-Light Company, went ham on Equity Bank CEO James Mwangi accusing him of sexual harassment some years back. Today she went on her Facebook to rub more salt to the wound by giving a story that started in the mid 2000s.

It’s been a while since I last posted on this page but I feel given the chatter on Twitter, its only fair that I set the record straight. Though I’ve received a lot of backlash, the support given me by many has inspired this post, and now more than ever, I believe the timing was right.

HOW IT ALL STARTED

This is the story of how Equity Bank CEO James Mwangi destroyed my business after ‪#‎ISaidNo‬. In the mid 2000s, I met Mwangi through a mutual friend and he soon agreed to bring his organization on board the Adopt A Light project by sponsoring and running an advertising campaign for the bank on 400 streetlight poles as well as High Mast structures. In fact, this act of corporate social responsibility is captured in their company records.

The campaign was supposed to be rolled out on Thika Road and Outering Road among other locations. In anticipation of this business, Adopt A Light took a facility with Equity Bank and ordered the High Mast structures from our partners in South Africa. However, the whole project was thwarted before it could take off after Mwangi made several sexual advances towards me and I categorically turned him down. He was a friendly, listening and caring partner only as long as the chase was on. Later on through changes made to our contract after the fall-out, I realized he had all intentions not to honor our agreement in case I declined his advances.

It didn’t take long after Equity Bank breached our agreement for Adopt A Light to be left with a massive bill to pick up. Before the matter spilled into the courts, Equity Bank hired Neptune Credit, an unlicenced debt collector whose approach to debt collection was unprofessional and not what one would expect from a bank of Equity’s stature. This was also unlawful as banks need or seek court orders before contracting the services of a debt collector. Or if they appoint one, the collector must start with the courts before taking any action. The story of how Neptune Credit harassed me and my children is captured under OB 38 of 15/4/2009 at Parklands police station. But as is pretty much the norm in Kenya, the case was closed before it started.

Mwangi only went to court for alleged debt after I won the highly compromised award (after lots of applications to deny me justice ) to try and stop the award. In spite of an IRAC report on the interest overcharge and the irregular debits, Mwangi adamantly refused to reverse the same. Even his managers realised his motives were personal and not professional because it is standard for banks to reverse proven irregular debits. This prompted me to go back and demand that the Bank pays in full what it owed my business and I have every intention of pursuing damages for destroying my company and the ensuing psychological distress.

WHY I CAME OUT

It took a lot of soul searching for me to share my experience after reaching my tipping point. It is true that Mwangi is a brilliant and talented banker, looking at what he’s achieved with the Equity brand. However, he was highly unprofessional with me.

At the time, I informed Chairman Peter Munga ( as well as other senior managers) of the happenings but he couldn’t defend me as his hands were tied. Wherever Munga is right now, he knows the truth and I hope one day he’ll stand up for me. But even if he doesn’t, I know someone will eventually vindicate me.

Make no mistake, this is not easy for me but I stand by my every word.