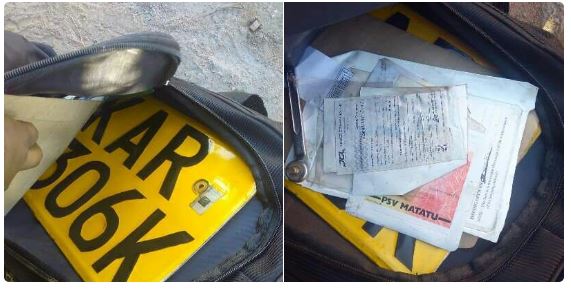 For those who use matatus in Nairobi, they have have at one point found themselves in a situation where a conductor takes your money and doesn’t give you your balance back. Some conductors either just stand at the door and keep saying they will give it to you then end up alighting then disappearing.

A guy by the name Samuel Njuguna decided to teach one matatu crew a lesson after they withheld his change. He took off the number plate of the PSV vehicle and left them stranded.

According to Njuguna, he boarded it at 6.30am at Roasters. The conductor as usual collected fares from the passengers and he paid with a Ksh1,000 note. He was to get back Ksh950 back but it appears the conductor told him to wait.

When they got to KCA University, the matatu was stopped by traffic police. The conductor was arrested and went away with all the money.Njuguna got angry and decided to execute some revenge. First he went to the driver’s side, then took the insurance sticker. He didn’t stop there, next he used a spanner from the glove compartment to take out the number plate then went with it.

08:23 a matatu took my money and left me stranded in the mat alone so i took their number plate pic.twitter.com/oCzqhUUYna via @LordeSirm

@ma3route oh plus i also took all their identification documents
Insurance n the likes pic.twitter.com/BLJjbqnyQf

The driver of the vehicle did get into contact with him to refund him the money and take back the items.