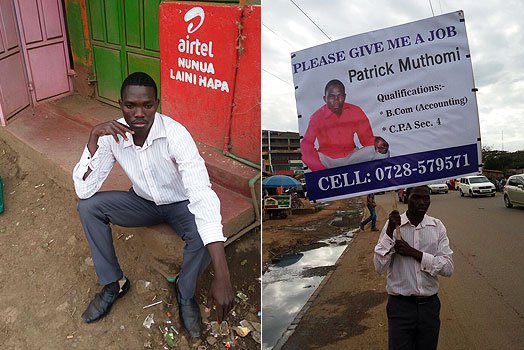 Kenya is churning out more graduates at a higher rate than the creation of white collar jobs. This has resulted in extreme measures to be used in looking for employment.

Patrick Muthomi, a Bachelor Of Commerce graduate from Chuka University, resulted in carrying a placard with his qualifications and contact details written on it then hawking his CV on Muthaiga Road. He also has reached CPA section 4. 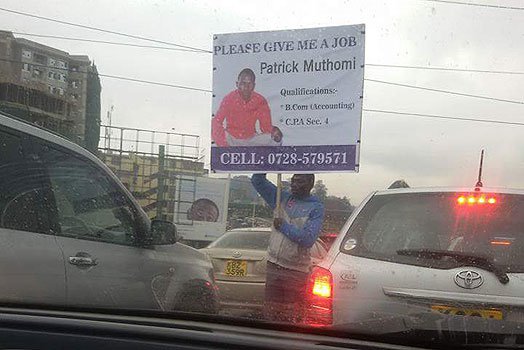 After graduation Muthomu got a job at Mwiga SDA Secondary School in Nyeri where he ended up working for 5 months. He then decided to leave the job, pack up his stuff together with his wife and child then headed to Nairobi to look for something better.

A year and a half passed and he hasn’t received a reply in his over 200 job applications he sent out. “I left Nyeri to come to Nairobi with big dreams of getting a good job and furthering my skills and career, but little did I know that Nairobi is much more worse in job hunting than other cities. I have sent more than 200 of my CV’s with no reply’s,” said Muthomi.

Currently he makes a living hawking tissue paper and serviettes in Kasarani and Roysambu. When he is free he heads to a nearby cyber cafe to see if any employer has called him for an interview. 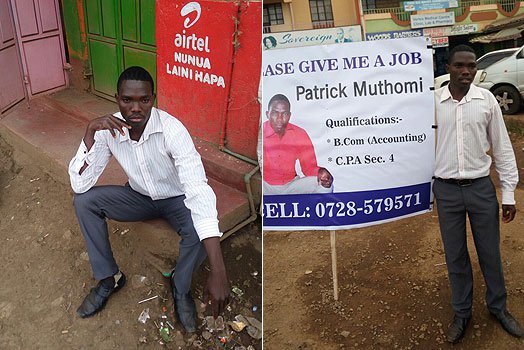 However, the graduate doesn’t want to leave Nairobi to look for a job elsewhere. “Although my biggest problem is finding a job, my mind is still telling me that Nairobi is the place for me to grow in my career as an accountant. For me this is the center of gravity,” he explained.

“I went to the busy Muthaiga road so someone could see my plight and hopefully offer me a job or give me advice on how to get a job. I do not want jokers since I am very serious,” he added.