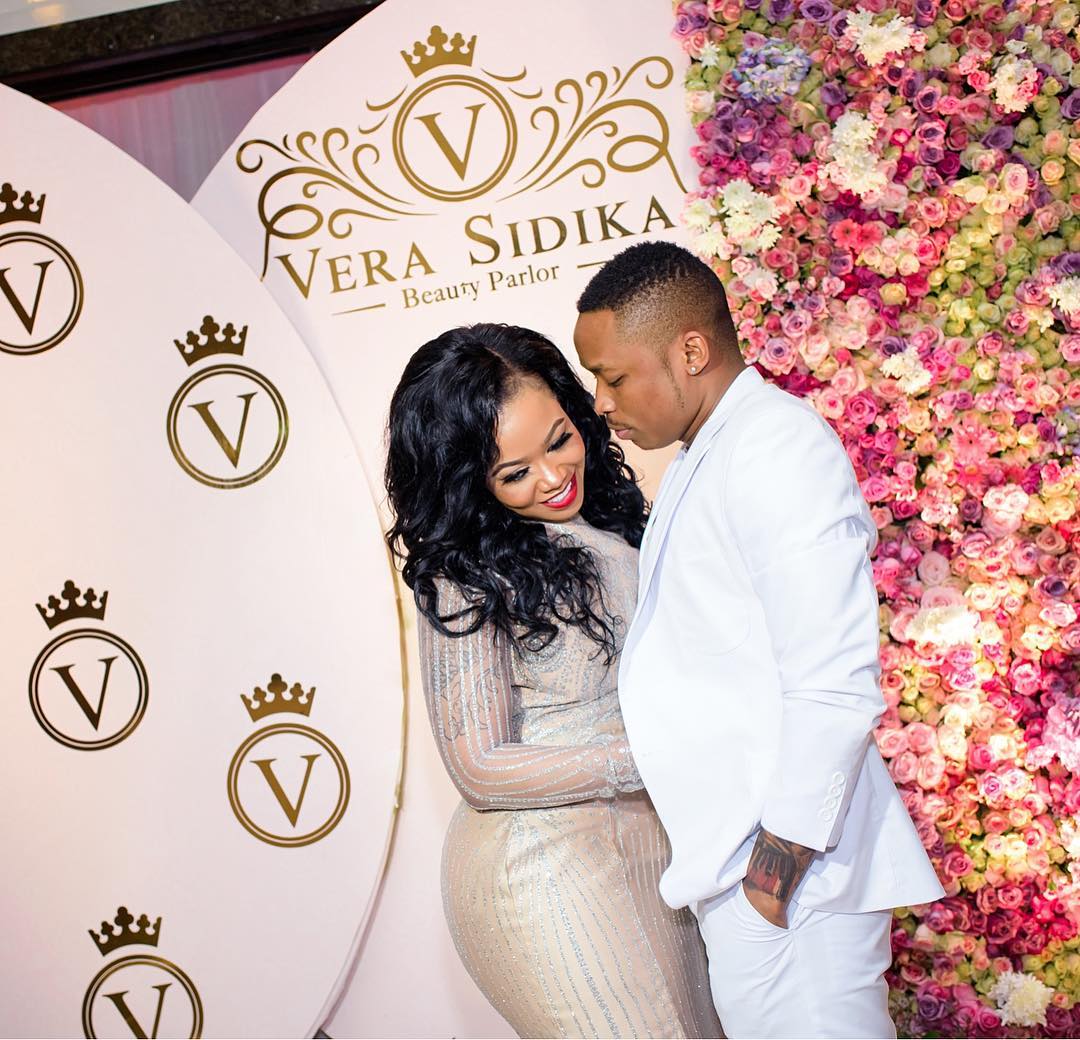 Just recently the biggest celebrity relationship in the Kenyan entertainment industry between Vera Sidika and Otile Brown ended. Vera Sidika released a mega statement on how she feels about the whole situation but her ex boyfriend Otile Brown decided to stay quiet.

Otile Brown has finally broken his silence after getting massive backlash on social media. He also posted a long statement sharing his side of the story. He said: 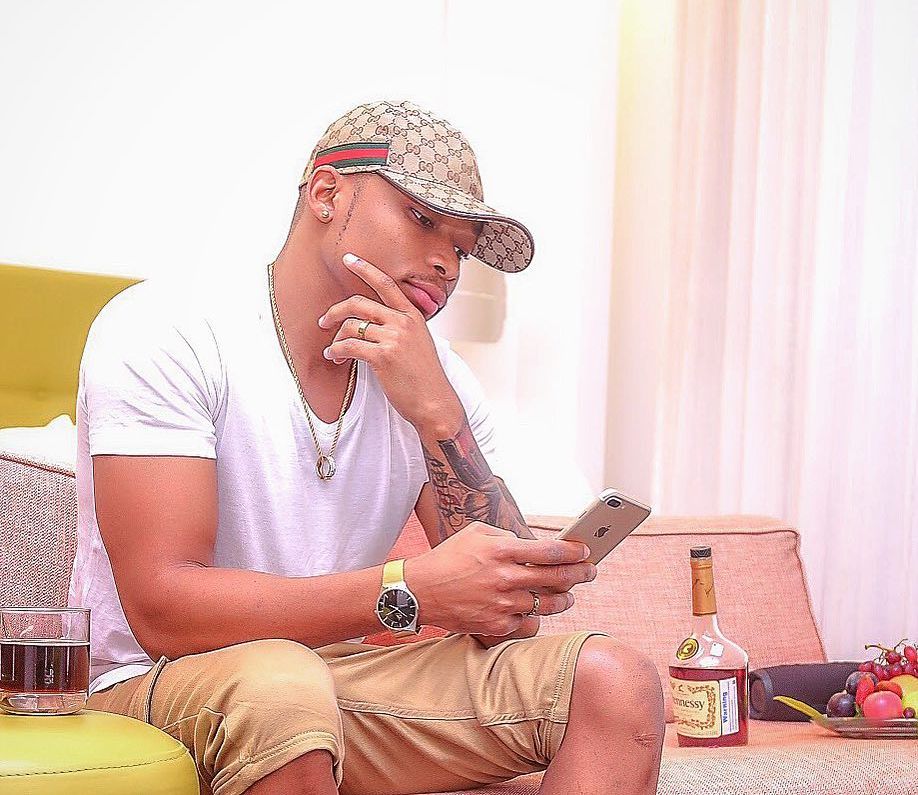 Waah the hate is to much just because somebody is quiet doesn’t mean they’re guilty, am just trying to handle the entire issue as a grown up… I promised myself that I won’t respond to the allegations until I realized just now that this was a mission to eradicate my career by making women hate me coz most of my following are women and yeah she’s succeeding….She’s playing victim and it’s unbelievable coz just a day before her posts we had a proper meeting and concluded everything as grown ups coz the relationship wasn’t working for me, there is something she did that really turned me off and ever since the relationship has been on sinking grounds, fights all the time and I could feel the distance between us even when we’re together, the love was fading away.

I believe she wrote all that not coz she’s hurting but coz she was afraid of what social media will say after realizing that we ain’t no longer together and maybe have moved on with another queen coz she cares so much about what social media think and say but me Hehehe I don’t care, you can just tell coz I never turn off the comments section no matter how bad people insult me. I loved Vee sana and cared so much about her those who know know, but she’s trying to make me look heartless and a user so other queens would see me different and be cautious anytime am trying to make a move towards any. 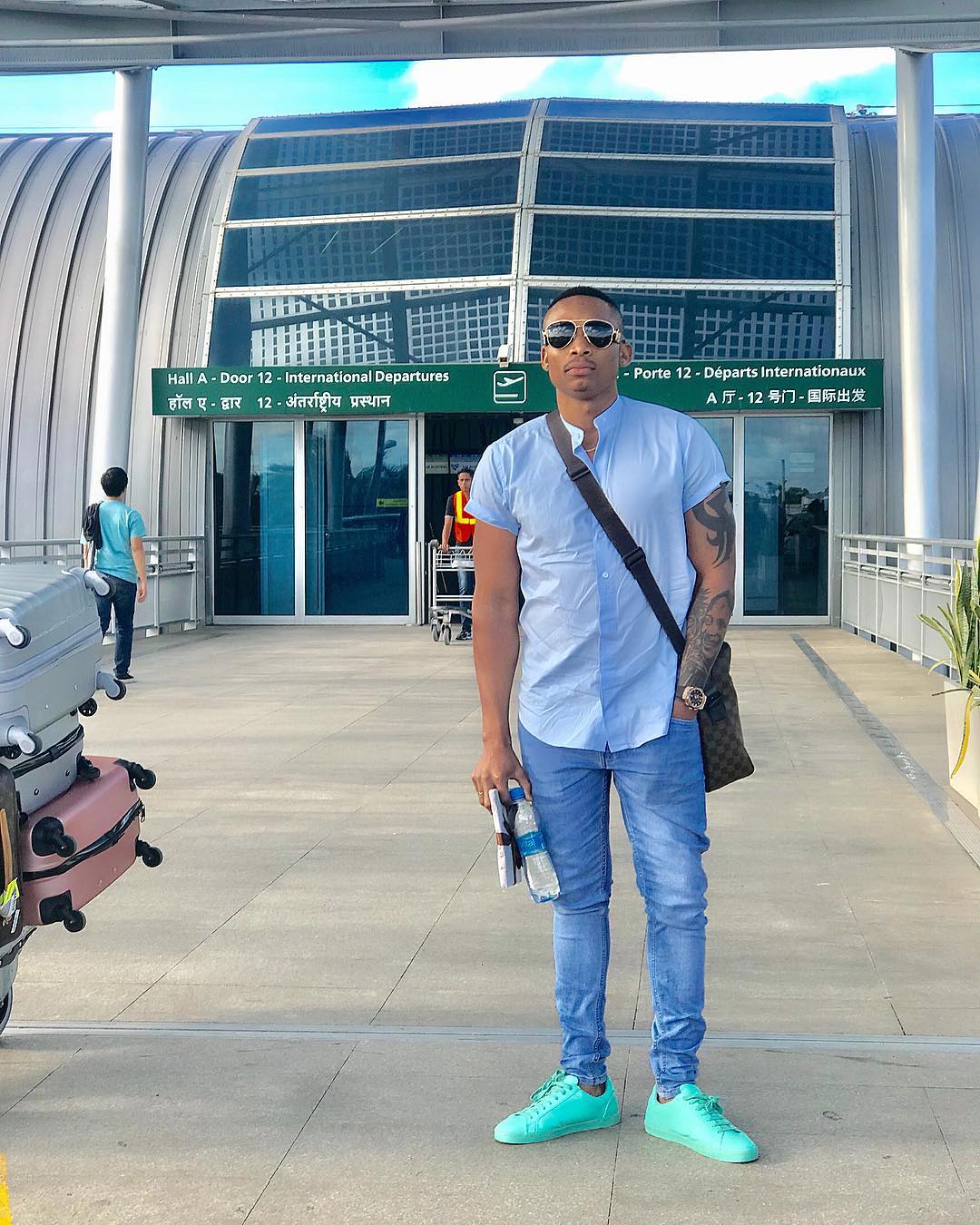 And you know, at the dinner meeting she asked me what am up to and told her about my upcoming international shows and she happily congrats me….funny thing is, she mentioned it. Why? So people would think she had something to do with it coz it’s obvious that when social media don’t know and they get to see me traveling for the shows, they’ll think that am doing way better without her, coz Vee are the kind of queens that you cannot leave them even if they did you bad and if you do then your life should be miserable or even die. Surprisingly I never asked Vee to be on Baby Love and “I swear” I once wanted to put her on a different song coz we once discussed on her appearing on one of my videos and she refused and respected that and promise not to ask her again but after she heard Baby Love she love it and asked to feature on it, she said it’s a nice response to the hate out there, at some poin I even refused but after we went to Kisumu we discussed about it and I agreed, DONT STEAL MY SHINE AND GLORY we’ve only dated for 5  months when I was already a star, have been popping for 2 years straight. 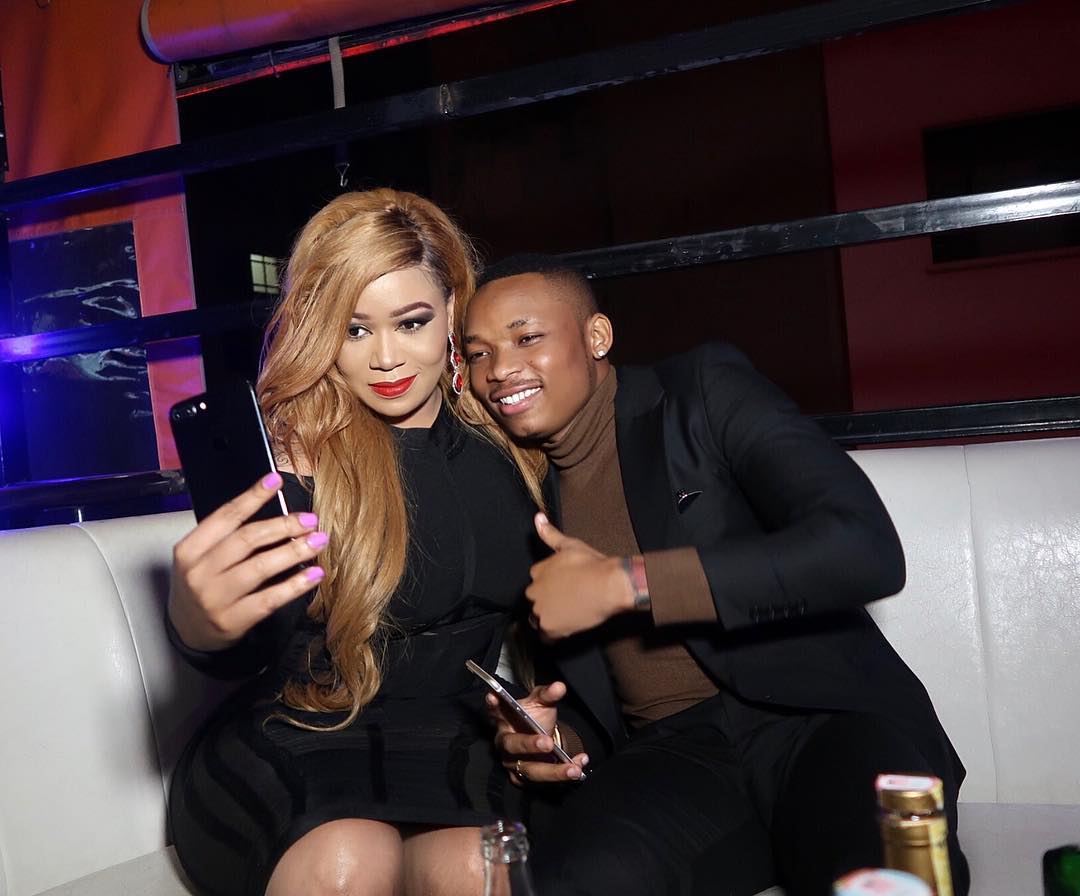 Jamani sasa mimi nimetoka kimziki ndani ya miezi mitano when I have been here getting money and making hits, you got to know me from my music and style. It doesn’t make sense. So you mean I stayed in a relationship with someone I don’t have feeling for, for 5 months just to get a video with her, that’s shady and don’t make me look that small maze you know am one of the greatest musicians in the country. I hustle hard and get paid….just coz you got more followers than me shouldn’t make you wanna steal my glory. This relationship was public and we’re both celebrities, so you expected my following not to add up when we’re the talk of East Africa. Your followers grew tremendously with 100k plus but you still say that am the only beneficiary coz Vera is known in Nigeria, USA and East Africa more.

You know, you loved me coz the only person who loved you as you and never cared that you’re famous or a diva…. 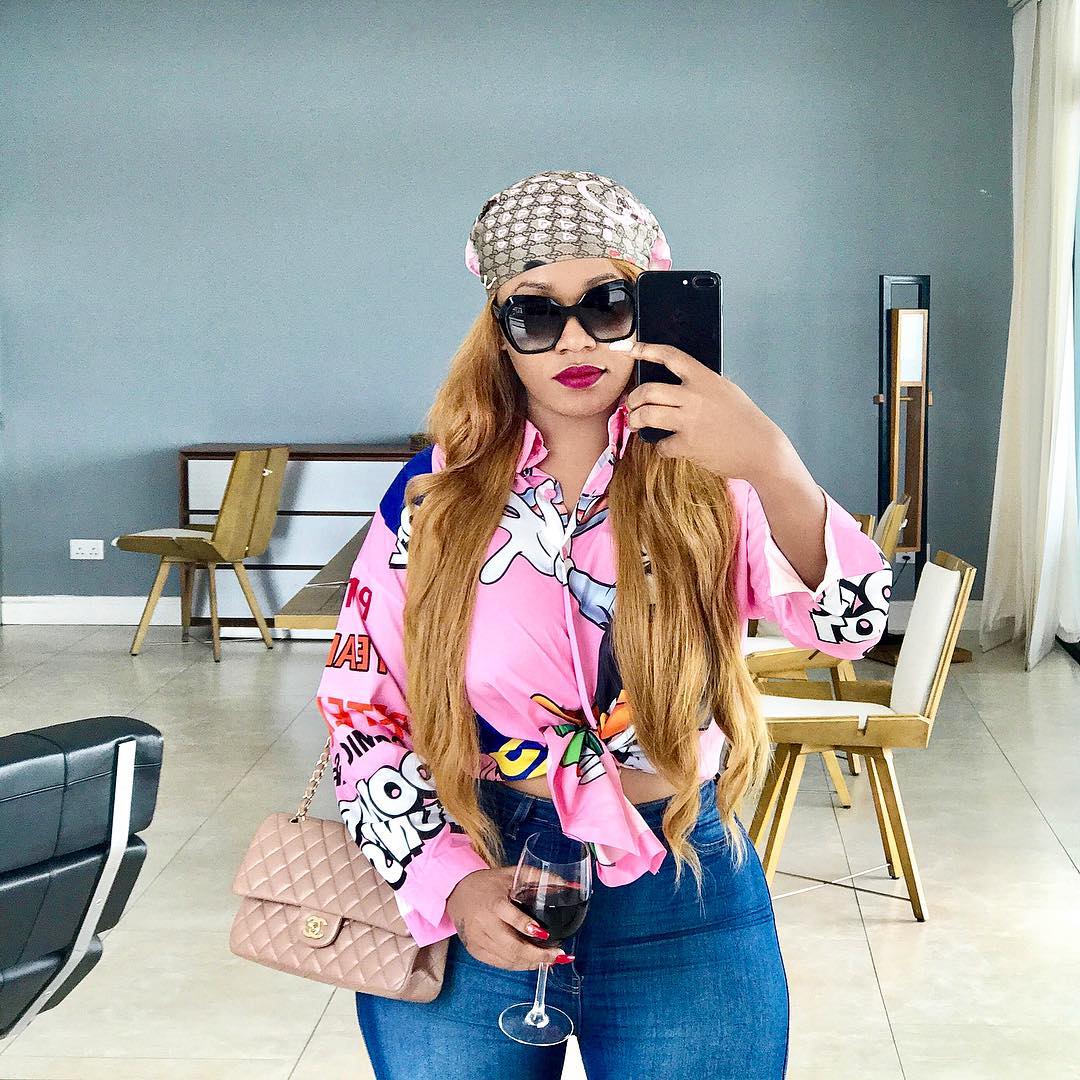 Anyway I got nothing but love for VEE, she’s a beautiful person with a beautiful hear, wish her nothing but the best in life, whatever made me quit I won’t say coz somethings are better left untold. It won’t do me any good to bash her but that’s pretty much what’s up.

God bless and life has to move on regardless and plz don’t hit me up nor tryna fix things coz you’ve sabotaged everything and am shook how you can switch on me like that….got me scared of you…. 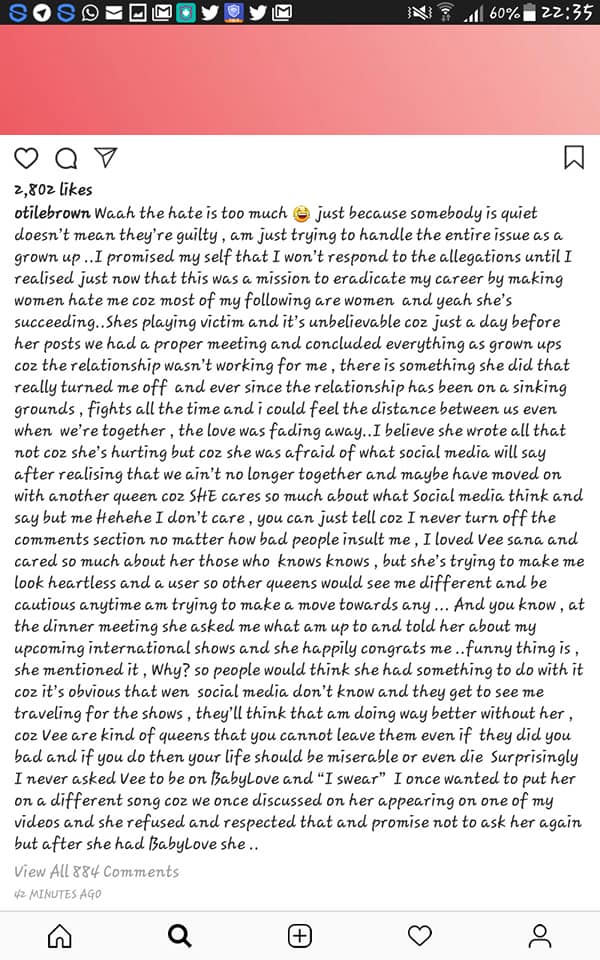 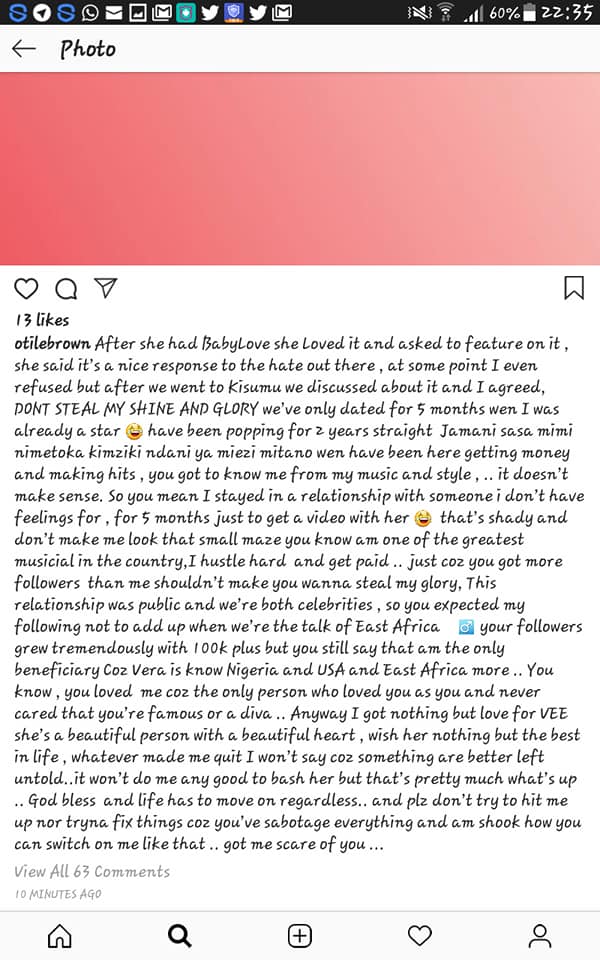