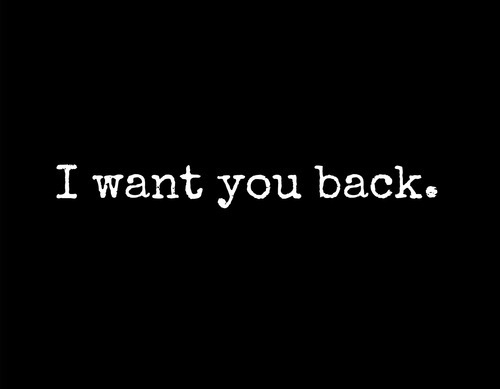 Breakups are a common thing in a relationship but sometimes one party may not want to move on and start dating other people since they are still in love with their old flame. Others may leave the relationship and discover the grass isn’t greener on the other side. If you are in such a situation here is a list of songs touching on the topic of wanting someone back:

The song is about Chris and an ex-girlfriend whom he pushed her to the point where she left him without any notice. He gets remorseful and now is wishing he could get his girl back.

Chris Brown clings on to his past love which he can now only experience while he’s asleep. While asleep, he is happiest with this girl and wants never to be woken up since he doesn’t want to return to reality.

The track goes into Ed Sheeran’s mindset after learning that a girl he recently broke it off with has already moved on with a new man.

Drake drunk calls up an ex-girlfriend and talks about how he is a better man than his new boyfriend. He also reminisces on the times they had.

6. Taylor Swift – Back To December

Taylor Swift apologizes to a guy she once dated and was incredible to her but she was really careless with him.

Adele admits her own personal flaws as she finds herself begging her ex-lover to recall why he initially fell in love with her.

In the track, Bow Wow addresses his breakup with long-time partner Ciara after rumors emerged that he cheated with Ashley R, who was a video vixen and one of Ciara’s friends.

Generally, the song is about holding out hope that a relationship can be saved.

This is a love ode about moving on from her previous relationship with Joshua Bassett who is at the time dating Sabrina Carpenter.

11. Charlie Puth feat Selena Gomez – We Don’t Talk Anymore
The song is a love duet bemoaning the regrets after a breakup.

12. Mariah Carey – Don’t Forget About Us

The track is off the album The Emancipation of Mimi. It talks about the emotions that are felt after the loss of a relationship.

The track is the fourth track off the album Secrets released back in 1996.

The song is about staying amiable after a breakup and trying to remain friends if they can’t date anymore.

15. Mariah Carey – We Belong Together

The track was able to hit #1 on the Billboard charts for 14 weeks. We get to hear the deep regrets that Mariah has had since breaking up with her significant other.

The song was inspired by Jermaine Dupri who, while in the studio, started talking to a girl on the phone after she had just stormed out after an argument.

This is a love ballad expressing love for a significant other who may end up hurting her again.

The song tells a perfect tragedy that reflects modern love within our society. We don’t realize how much we need something until it’s taken away from us.