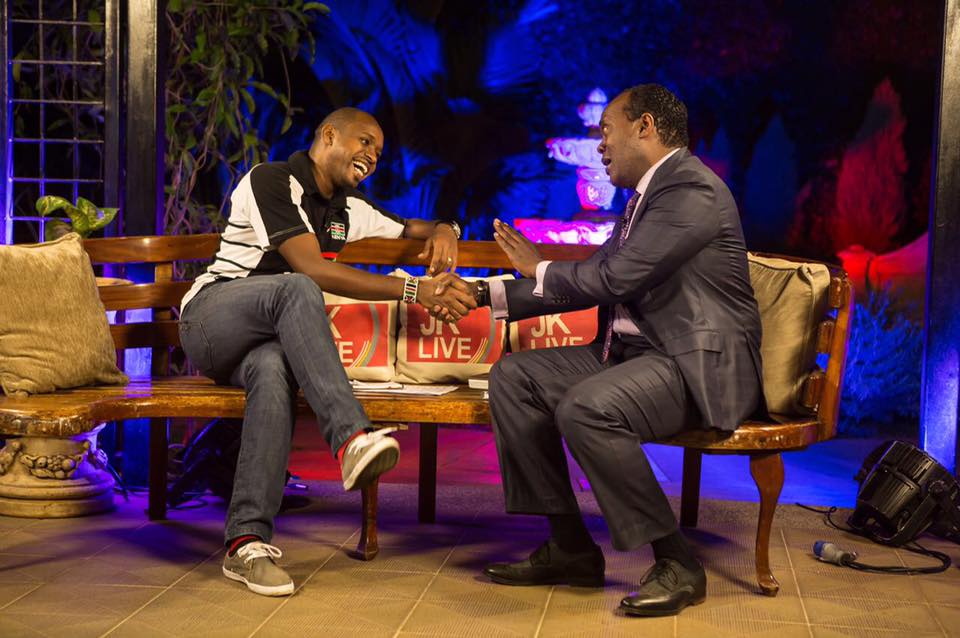 Yesterday during Jeff Koinange Live, we were treated to something that was really unexpected. Activist Boniface Mwangi was the main guest of the show. However, when another guest by the name Moses Kuria who is a member of parliament showed up, Boniface couldn’t handle having a discussion with him. He decided to walk away immediately as the show was running. Here is the clip.

This was the reason her gave for walking out:

When Jeff Koinange invited me to his show l asked, “who am l going to be with?” He told me Dennis Itumbi and l declined the invite. l didn’t want to waste my time with a spin doctor who is very allergic to the truth. After a short while Jeff got in touch and told me he will host me alone. KTN produced a poster for the show that circulated online of Jeff and I. Jeff tweeted several times about the show and there was no mention of another person. The show started well and we had barely warmed the bench when Jeff pulled a fast one on me. Moses Kuria, someone with several hate speech court cases, walked in. I immediately stood up and walked out on principle. As a photographer l witnessed first hand what hate mongering can do during the post election violence of 2007-08. Kenya was almost destroyed by tribal politics in 2007-08, which led to the deaths of over 1300 people. Kuria is in court for hate remarks that could lead our country to tribal violence. My values wouldn’t allow me to share a platform with Kuria. I will not share a platform with hate-mongers, thieves, and their apologists. My values are more important than TV airtime. Thank you for watching. #TeamCourage #BMUnBounded